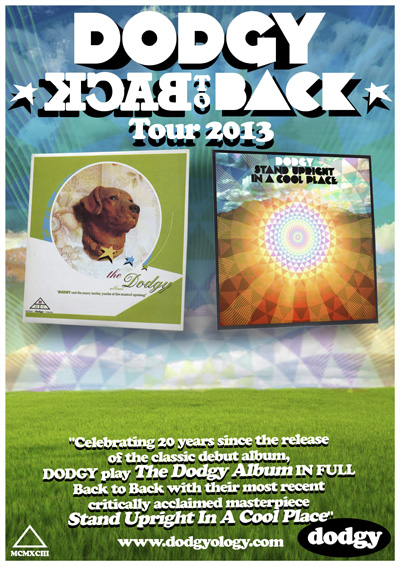 Dodgy, the seminal Britpop band before the term was even coined, are celebrating 20 years since the release of their debut album, The Dodgy Album. The album was part written in the wilds of North Wales, and one of the songs of the album, called Hendre Ddu, is named after the cottage they were staying in. So, why not bring them back to where it started, see them at Hendre Hall, Bangor, North Wales in May.

They will be playing the legendary Dodgy Album (1993) and Stand Upright In A Cool Place (2012) in entirety with all original members. Special indeed!

This year is the 20th (Platinum) anniversary of the release of The Dodgy Album, the band’s debut LP. This coupled with the success of their recent comeback album Stand Upright In A Cool Place has prompted this series of live dates through MAY and JUNE, highlighting the ‘now’ and ‘then’ of Dodgy performing both albums live.

The Dodgy Album set includes tracks such as the singles ‘Lovebirds’ and ‘Water Under The Bridge’, the track acknowledged by the likes of Oasis as defining aspects of the Britpop sound before the term was even invented.
In 2012 the original line-up of Dodgy released a new album Stand Upright In A Cool Place, receiving universal acclaim, 4 and 5 star reviews and prompting The Word magazine to say

[quoteleft] They will be playing the legendary Dodgy Album (1993) and Stand Upright In A Cool Place (2012) in entirety with all original members. Special indeed![/quoteleft]

It is with some irony that as sales of the new album by Dodgy have grown, through word of mouth and social media, it has nearly matched that achieved by their debut.
The fact that The Dodgy Album achieved modest sales on it’s release, is more of testament to a time when a record company (in this case A&M) would develop and stick by an emerging artist, a commitment that enabled Dodgy to go on to make the gold and platinum chart albums Homegrown and Free Peace Sweet.

The Dodgy Album was recorded at Parr Street Studios in Liverpool, produced by The Lightning Seeds Ian Broudie and also an early career marker for mix engineer Cenzo Townshend, who is now one of the UK’s most sought after and respected mixer/producer including recent credits such as The Vaccines ‘The Vaccines Come of Age’, The Maccabees ‘Given To The Wild’ and work with The Kaiser Chiefs, Snow Patrol and Miles Kane. The video for ‘Water Under The Bridge’ was also one of the first commissions for director Jamie Thraves who after directing further videos for Blur, The Verve and an award winning video for Coldplay’s ‘The Scientist’ went on to write and direct feature films such as his latest ‘Treacle Jnr.’

For Dodgy playing these two albums together makes most sense musically. Songs such as ‘Cold Tea’ and ‘Grand Old English Oak Tree’ are live favourites from the first album and the harmonies and pastoral folk influences are something also featured on Stand Upright In A Cool Place, which takes much of it’s inspiration from folk tales from the Malvern Hills. Playing both these albums will be a challenge and one that the band is relishing.

STAND UPRIGHT IN A COOL PLACE the new album from Dodgy was a long time coming, 15 years to be precise since the platinum selling ‘Free Peace Sweet’ and from the four and five star reviews and many media plaudits the new album has received, they have successfully overcome the often tricky task of a band reinventing themselves, to make a contemporary and relevant album. Creating a sound with “golden harmonies and echoes of CSN&Y and Fleet Foxes”, described by The Word magazine as “Laurel Canyon by way of The Malverns”, a result for which the contribution by mixer Matt Pence, known for his work with the likes of Midlake and John Grant, should not be underestimated.

The first time round, Dodgy were only together for seven years but in that time they sold over a million records worldwide, released three albums and 12 Top 40 singles, including 3 Top 10s and the Top 5 hit Good Enough, still a staple of the radio playlists; sold out the Brixton Academy for three nights in a row and were awarded an unprecedented 90-minute Saturday evening slot on the Pyramid stage at Glastonbury Festival in 1997 just before Radiohead. Not bad, considering that they also partied harder than an Ewok.

Dodgy had an extremely busy Summer, even by their standards, promoting the recent critically acclaimed album “Stand Upright In A Cool Place”, as live gigs and festival appearances have always been an important part of the Dodgy experience, for many they are the perfect festival band & Summer 2012 was no exception, with Dodgy ripping it up at prestigious festivals such as BT LONDON LIVE, Camp Bestival, V Festival and Kendal Calling, as well as various other boutique festivals around the UK.