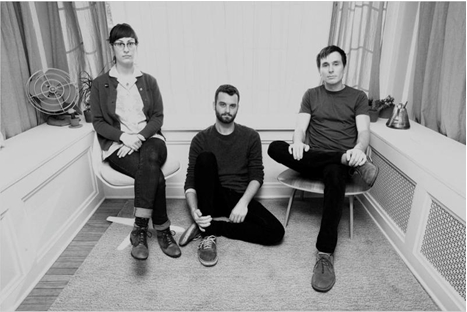 Without a distinguishable understanding of the pop and intensity, a silent video of a Lemuria show would appear to be that of a blistering hardcore trio. To the viewers’ surprise, turning the audio on they’d find the stage diving mania and screamers are really chanting “Maybe I should wear lipstick too” or “You fit in my skin, softest I’ve let in” as guitarist/vocalist Sheena Ozzella’s dynamic, melodic voice guides the unlikely chorus.

Lemuria might not sound like they are from Buffalo, NY, but the band was proudly birthed there, following the legacy of an oddly eclectic, if not eccentric, music scene. When you loosen your ears to the sugary indie-pop, you’ll discover discordant notes, odd time signatures, and brutal riffs creating menacing yet catchy music.

Releasing their early 7″ EPs and splits on drummer/vocalist Alex Kerns’ label Art of the Underground, they landed their debut full length Get Better on west coast pop-punk label Asian Man Records. Following their debut, and worked into an ambitious DIY touring schedule, they sprinkled 7″ releases around on labels such as Hex, No Idea Records, and Suburban Home. Eventually, they would settle in with the Boston-based Bridge Nine Records with their 2011 sophomore album, Pebble. Pebble received great critical acclaim and was featured with SPIN, RollingStone.com, and countless other magazines and websites.

Now, Lemuria are gearing up to release their newest effort The Distance Is So Big on Bridge Nine Records on June 18th. Their most mature and best effort to date, this album was recorded at the Magpie Cage with J Robbins (Against Me!, Jawbreaker, The Promise Ring) earlier this year. Look for song premieres, pre-orders, and more news coming very soon.