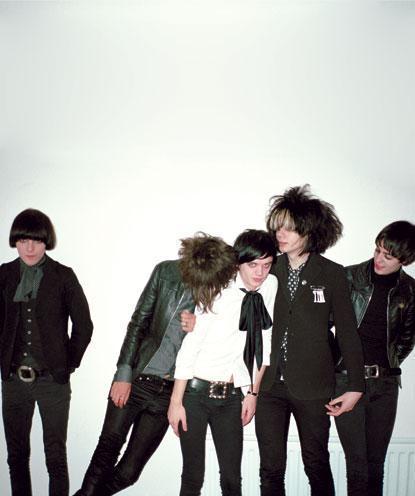 Here we are in 2007, and every young band’s partying like it’s 1982. The Low Miffs are a band I’ve only encountered once, having had the audacity to play in Franz Ferdinand’s old Chateau, playing that spiky, angular, new wave of the new wave thing very like…well, Franz Ferdinand. Tonight they’ve topped that, and gone for the ultimate in authenticity; they’ve only gone and recruited Malcolm Ross from Josef K (they were the coolest Scottish post punk band ever, if you’ve been spending more time on your hair than boning up on musical history) on guitar.
However, this is 2007, not 1982, and by the time I arrive the band have been and gone. Doors opened at 7.00, and even more inconceivable, the band played on time!
I make my way through a sea of asymmetrical haircuts and black-clad waifs to meet members of Glasgow’s top garage bands, here to take notes on The Horrors set.

The former Glasgow garage band known as Neil’s Children take the stage, having swapped French cuts for Robert Smith just out of bed hairdos and wah wah pedals for cowbells. They sound like a band trying as vainly to copy The Rapture’s new album as The Rapture are trying to recapture their own past glory.

At last The Horrors come on and play for 29 (we timed them) minutes. As it’s 2007, not 1982, I judge a band’s quality now by how often I take a cigarette break through their set. The Horrors didn’t give me time to take one, but I wouldn’t have left anyway. Their stripped down take on garage goth is brutally effective, and just works. Faris is a real showman, whether hanging upside down form the ceiling like a spider from Mars, or draping himself in the St Andrew’s flag.
He doesn’t smugly ingratiate himself with the crowd, though: when they start chanting to the intro of “Sheena Is A Parasite”, he tells them, “Shut up, we’re not the fucking Fratellis”. The crowd love it and promptly descend into a flailing moshpit. Yes, you heard right! People danced and even spilled beer at an indie gig!
The Horrors are certainly not the Fratellis; they’re a band who remember the dark gutter heart of rock n’roll, with the Cramps’ theatrics and Mary Chain hairdos, short set times and no encores. They may not have the Cramps’ charisma, or the Mary Chain’s capacity for chaos: and they definitely don’t have songs as good as either of those bands. But for the time being, they’ll do. They have pushed music a little bit forward, to 1983.