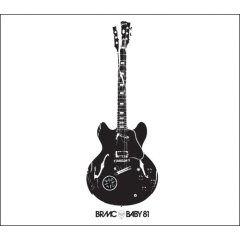 ‘Baby 81’ sees Black Rebel Motorcycle Club return triumphant following the hugely acclaimed ‘Howl’ album. This sentence is in complete contrast to the NME’s recent response to BRMC’s 2007 comeback, according to them ‘Howl’ was a dismal Americana failure. True its sales where low in this country and interest in the band has dwindled since they burst onto the scene in 2001 with their debut long player. But rather than the final nail in their drone coffin, ‘Howl’ instead was a rebirth that catapulted them from nobodies in their native land to a new deal with Island, landing them a major arena support tour with the Killers in Europe, such was its success.

So our three leather clad heroes return, sounding more together than they have since their debut, the fractions that led to the more acoustic last album veering from its predecessor seem to have been long put to bed. Jago’s pounding drums return to the core. This record is trademark BRMC and shows their balls in mixing the sound of their highly successful debut with the polished pop of its noticeably less successful follow up ‘Take Them On, On Our Own Terms’ and the lo-fi acoustic Americana old fashioned straightness of ‘Howl’.

Album opener “Took out a loan” is an energetic starting point with the trademark loose soulful guitar of Peter Hayes starting the proceedings, after the opening refrain he’s joined by the deep bass of Robert Turner and Nick Jago’s steady restrained thumping. “Berlin” is a riffy slice of drone pop with its questioning refrain of “What happened to the revolution?”
First single “Weapon Of Choice” and “Window” then follow. Both songs are reminiscent of ‘Howl’ with the first being a fast paced acoustic pop song and the second a more dreamy slow piano/acoustic lament of sadness and struggle but resulting in the listener being uplifted rather than depressed.
“All You Do Is Talk” is a Sam’s Town-esque string and synth laden gem of fragile beauty and yet has the kind of sound uniquely BRMC’s due to Hayes vocals and the fact they are more influenced by Spaceman3 and My Bloody Valentine than Springsteen and New Order. With the endorsement of the multi million selling LA band hopefully ‘Baby 81’ will sell enough in this country to wipe the smug smile from the NME who did all they could to destroy them when they felt they weren’t cool enough to demand their attention.

Noticeably on this record Turners vocals are used mainly for harmonies allowing Hayes reverb laden vocal to lead the line, this has a confused result as the album sounds disjointed when Turner takes over on lead vocal duties like on “Lien on your dreams”. In the past they had been perfect equal partners interflowing from one to the other allowing the track listing to be interchangeable as it flowed from beginning to end in a similar fashion. Yet in this record they are used to change the tract of the flow. Sadly this doesn’t happen enough and half way through ‘Baby 81’ loses its way for a few songs, not that the songs are poor- its just they are too similar and the lack of variety kills the need for concentration with it becoming a bit like background music that passes the listener by.
The tail end of the album picks up though with “American X” , an expansive layered 9 minute drone workout that is long, but doesn’t fall into the dull, boring territory a lot of songs of that length from the West Coast drone scene can threaten to. Album closer “Am I only” highlights the mix of fragile beauty and layered haunting howl that sums up the better majority of the album.

The supposed new rock revolution of 2001 has long been replaced by the new rave/rock furore of 2007 and many of the supposed heroes of that era are back working in Asda/Wal Mart. BRMC have stuck to their guns and made an album that sounds like only them, well them and the obvious references to Jesus and Mary Chain. Baby 81 is a road map of where BRMC have been and where they are headed, the journey may have not been that smooth but where is the interest in that?