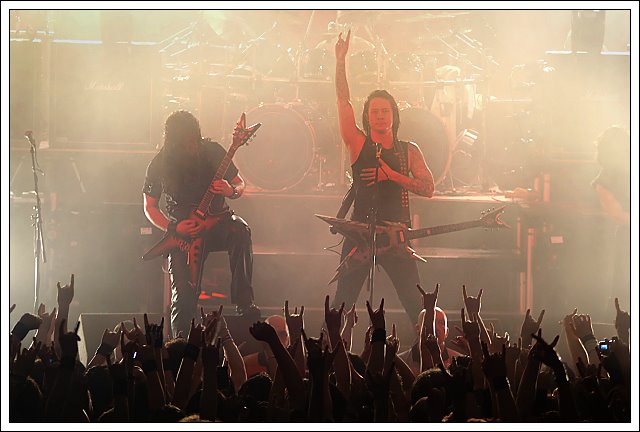 Trivium’s crusade rolls into Liverpool and a long with them they bring some great bands and a genuine legend.

Clearly pleased to be on the tour (Despite looks of anger, every so often massive smiles break through.) Sanctity are an instant and absolute success with the already massive crowd it’s post Black album metal and lead singer/guitarist Jared assaults the material as if it’s his last song before his execution-close you eyes for a second and he sounds like Hetfield open them slightly and he has that wide-legged stance and presence, but the crowd react wildly to the songs from their debut ‘Road to bloodshed’-much praise will be heaped on these guys from this tour and onwards-it’s completely deserved as far as thrash metal goes they don’t just push all the right buttons they punch them out.

Gojira provide another colour to set which is particularly apt as they approach their music like French expressionist painters-painters who listen to bands like Death & Morbid angel-but artists nonetheless. They are simply massive-not in the conventionally loud sense, but in the fill every ounce of musical real estate. With a grand vision and the musical talent to see it through Gojira pull the crowd in and you find yourself holding on to the giant sound these guys make. Off stage Joe Duplanter is a quietly spoken, polite man but tonight, on stage he’s a guitar swinging and beating monster that ensures Gojira’s set is both moving and interesting whilst still being crushing, superb.

It’s been a very long time since we last saw Annihilator on these shores and even longer since they played Liverpool, a large portion of the crowd have never heard of Jeff Waters or the legacy Annihilator have created, indeed outside Jeff can slip by unnoticed amongst the people waiting to get a glimpse of Matt or Corey; but when Corey comes on stage to introduce them people take notice – and rightly so, in their ten-year plus existence Annihilator have constantly stuck to their roots and kept the torch burning for heavy thrash and metal; even when they were deemed dirty words. Tonight could have gone wrong. Kids unaccustomed to the material, slightly older generation complaining “They weren’t as good as they used to be”-it could have gone wrong, but it doesn’t. Jeff is greeted with, well to be honest a massive amount of respect, as he creeps out playing ‘Operation annihilation’ people go insane there is a distinct warmth from the audience and a real moment is created, one no doubt duplicated across every venue they play. Lets not forget though, the music is the important thing here and Annihilator draw from their vast catalogue-‘Set the world on fire’, ‘Clown parade’, ‘Fun palace’ all sound fresh and rejuvenated; it’s an all too brief set but as kids are ejected from the pit and as the newly appointed bassist Brian plays the intro to ‘Alice in hell’ there’s a realization within the crowd that they will have to invest in some Annihilator albums very soon.

The crusade Trivium are currently on seems to continue apace and when the set is revealed in it’s entirety the crowd are under no illusions they mean business. Massive drum risers and each side podiums with which to play from – this may sound ostentatious if it were not for the fact that Trivium are confident, not cocky and have the quality of material to generate such a spectacle. Arriving on stage to choral chants and then opening up to ‘Entrance to the conflagration’ sees the venue come unglued.
It’s clear from songs like ‘Gunshot…’ and ‘Ember…’ that Trivium will not be playing venues of this size for much longer-their popularity and how they are received is simply too great-in many ways like Metallica lost some fans by allegedly ‘Selling’ out and doing video’s (One.) then moving to arenas, Trivium are simply doing what they said all along, bringing their brand of metal to the biggest audience possible-the only time this fails is if the music cannot grow along with the scale. When you hear ‘Like light to flies’, as many did a few years ago you realize that Trivium can move to the next level.

The new material is greeted in some cases more feverishly than the older established songs and ‘Anthem…’ proves to be just that, the mix is just about right and despite it only being a few dates into the tour Trivium are settling in nicely.

So it’s with a little sadness that we know they probably won’t play these places again but tonight it serves to highlight how special seeing a band destroying an ‘intimate’ gig can be.