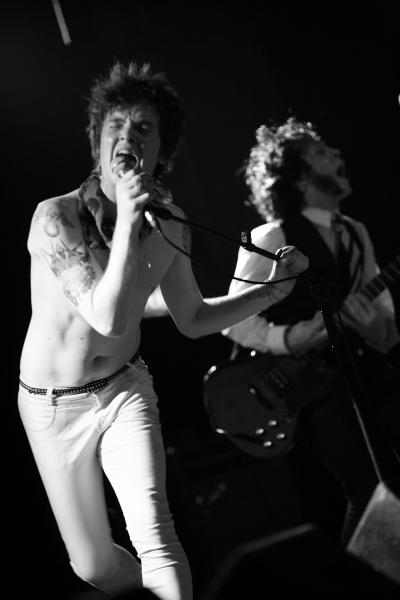 Tonight is one of three comeback gigs for The Bravery, who are in town to promote their new record that’s due out in May. Considering they played SECC last time they were here, most of us presumed the tickets would be like gold dust. However there are only a handful of people inside the venue when the finest band to hail from Edinburgh in recent years (Eh The Vivians duh) take to the stage. But like that would ever dampen their spirits. After all, there isn’t much you can do when the venue doesn’t even know you are playing and decides to open its doors a mere five minutes before you’re due on.

Had Glasswerk managed to get a few more drinks in them beforehand, then dancing to the infectious ‘Divided We Stand’ would have been vital… but with the floor empty and only half a vodka and lemonade in us (remember, the doors had just opened), such moves would only have resulted in a large roar of laughter from the everyone here. Still, the song stands up strong and holds the key to what could be their breakthrough track – one filled to the rim with attitude that will make indie kids on dance floors up and down the country go wild.

Throwing in some new songs too, we finally start to see a new side to The Vivians. We see a band developing who not only have a couple of cracking songs but one that can fill an entire set with them. Finishing on ‘Doctor, Dr, Doctor, Dr’ you can’t help but feel sorry for a band who deserve a much bigger audience that this. The place is still pretty dead when the second act starts singing – maybe people have finally cottoned onto the fact that The Bravey are one of the worst bands to step foot out of New York. And if you want to catch The Vivians at a Bravery free show then make sure your at King Tuts on May 12…like you would be anywhere else anyway.