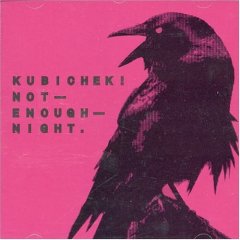 In recent years, the North East of England has produced numerous bands, with debut albums that really strike a chord with the people of Britain; Maximo Park and Futureheads to name but two, and Newcastle upstarts Kubichek! are no exception.

Backed by a heap of media praise accompanied by admirers from the likes of Editors, Bloc Party, Zane Lowe, Steve Lamacq and the aforementioned Maximo Park and The Futureheads, its easy to see why Kubichek! are held in such high esteem. Already a mainstay in their native North-East, the rest of the UK will surely be soon taking this band to their hearts.

The album kicks off with ‘Roman is Better’, Musically brilliant and even better lyrically, the line ‘I’m the last thing you need in your head’ couldn’t be further from the truth. Former single ‘Nightjoy’ is among the numerous highlights of the album. Already a permanent fixture in Indie clubs across the country, this song will not leave your head once you have heard it. ’Hope is Impossible’ shows a quieter and softer, but no less impressive side to Kubichek! and then comes ‘Stutter’, an absolute masterpiece. Anthemic and Beautiful in equal measures, it is 3 and a half minutes that will leave you astounded. The lyrical content of ‘Not Enough Night’ is simply remarkable. ’You could’ve had almost anything, but you threw it away’ from Hometown Strategies being another example.

‘Start as we Mean To’, at a fraction under 5 minutes is the longest and perhaps most heart wrenching track. A monumental number which wouldn’t sound out of place on Editors ‘The Back Room’, expect this to be ringing out around the festival circuit come the summer.

‘Not Enough Night’ is an album which is both mesmeric and beautiful in equal parts. Expect to hear an awful lot more about Kubichek!