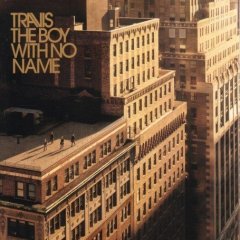 Travis – The Boy With No Name

Travis never went anywhere. They just stayed in our hearts until we were ready for their next show. Are they any different now or just the band we fell in mushy love with in 1990-something?

Maybe the music’s different. Maybe they’ve practiced more. But it’s still wee Fran Healy singing, and he always sounds like him, so Travis
aren’t different to the band of ‘Driftwood’ fame. Y’know they did come up with a hell of a load of corkers. They were the band of the moment.

Then they’ve had babies, and gotten bored, and found themselves and creative freedom, an’ all that. I’m sure they’re very liberated now.
They’re all grown up. It’s not the rave-synth-rock-blood-core I’d like it to be. No, they haven’t grown with me.

I bought their old album, so there must be something in there of me? Yes, they’re 6 years ago. They’re that summer, and all that
prickish shit of anecdotes and bbqs and that girl and smoking daffodils in the fresh moon air with nothing but the sweet breeze of nostalgia
whipping at yer knackers.

I would buy it. Just to thank them for the good music they played back then. They’re good chaps aren’t they?

If you don’t know travis from the first time round…they were as famous as Coldplay. But only one married into Hollywood and in their peak they played headliner at the Carling Festival y’know?

The other one, who didn’t marry into Hollywood went to live with fairies or something. really, it sounds like I’m being bad on these guys, but they really are the giraffes tits.