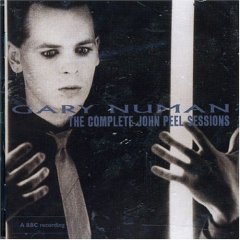 Recorded in 1979, in January and May, live in the studio with John Peel this album shows music genius, true genius.

Since his band’s first album ‘Tubeway army’ in 1978 up to his latest album ‘Jagged’ in 2006, Gary Numan has remained a household name, whether you love him, or hate him. What could be better than a Gary Numan album? The complete John Peel sessions. The introduction to a brilliant album, is the song ‘Me I Disconnect From You’, the creepy synth is then accompanied by a droney guitar and then whips in the truly legendary vocals that is Gary Numan.

After listening to this amazing CD so many times I come across my favourite electropop anthem, ‘Cars’. This song that has been covered by many bands, including heavy metallers FEAR FACTORY! Another song is the new-ish track ‘RIP’ showing that he can still create astonishing music even 20 years after ‘Cars’.

Gary Numan has been around since the 70’s, well known, well respected and an influence to many, this album shows why. The album entitled ‘The Complete John Peel Sessions’, shows the music which was produced from two of the best men in the music business. John Peel, one of the greatest DJs of all time recorded the tracks with Numan live in the studio to produce this downright essential must-buy for electro-pop fans, industrial fans, and Numan fans.