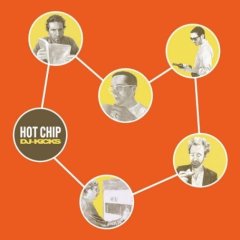 Some might consider it a little pretentious for a band to release a selection of favourites within only a few months of their own breakthrough album.

It seems to smack of self-importance and suggests the band have good carried away with their Mercury Music Prize nomination and the subsequent bandwagon-jumping which accounts for the ridiculous success of average single Over and Over. What’s more, the majority of this twenty-four track hour of boredom is not even as good as Hot Chip’s own material. I suppose you have to give the Londoners credit for generating even barely palatable music from such mediocre influences.

Admittedly, if you happen to be one of the drones who mindlessly follows media hype and now believe that Hot Chip are cool, you may like this collection; however, if this is the case then you wouldn’t be thinking for yourself, so your opinions are essentially irrelevant. While this album occasionally provides a glimmer of hope in the form of songs by Grovesnor and , these are soon extinguished by yet another offering from the band’s seemingly bottomless assortment of overhyped dross.

I would love to say that this is the last we will hear of Hot Chip, or that they will show an improvement on their next release, but sadly both of these possibilities remain extremely remote.