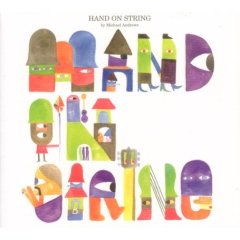 If we scratch away hard enough at our grey matter, we can probably still relate Michael Andrews to ‘Donnie Darko’ after his commendable, commissioned composition of the films score. Sales shot skywards when it was widely realised that the 80s tracks in the film were far more saleable than the score, even with its later added xmas number one single, the ‘Tears for Fears’ classic ‘Mad World’ (a duet with childhood pal Gary Jules) being tagged onto the end. Still, an accomplished musician with many credits to his name including his work on, amongst others, the ‘Orange County’ and ‘Cypher’ soundtracks. His own indie band ‘Elgin Park’, peaked at the turn of the century, with a self titled LP. MA now uses this name for his recording label. Brendan Benson and Jason Mraz have utilised his multi-instrumentalist talents on their own projects. So here we find MA with his predominantly self produced, written and performed solo debut.

A brief and diverse instrumental offering eases us into the mood of the LP, before a pleasant backdrop supports a strong yet wistful voice to reveal the somewhat hoped for element of vocal expression. And now its here, a broad sonic spectrum is opening up around my ears. ‘Just a Thought’ is the first highlight. Visions form of Anne Dudley fronting Pink Floyd, as they provide music for something like a long overdue ‘Air’ remake of the fantastic Arthur movies. And no sign of that schmaltzy Christopher Cross either! It’s a strange ensemble, accessible in the way that it asks nothing of the listener but to surrender to its intriguing and sublime embrace, as it goes on its merry way. Fair enough, if going blind to the sound of ‘Korn’ is your bag, keep your hands off this one! The title track surprisingly stays in keeping with the rest of its counterparts, offering no expected ‘unexpected’ bits. Some subtle backing vocals are a joy to discover lurking there behind MA’s lead vocals. The last few tracks wander off into schmooove territory probably frequented by the likes of Jack Johnson or a latter day Paul Weller. Closing with a fleeting rendezvous with the LPs opener, it ends with a good five seconds of silence which lightly rests us down in the real world. This is great because that’s where the play button is. Next time, I’ll be sure to press repeat. This is every bit as useful as background dinner music or summer BBQ music, good for sharing with others. It too, could also serve as the soundtrack to you electrocuting yourself as you drift down into the depths of a bathtub with your earphones in. How many times?!