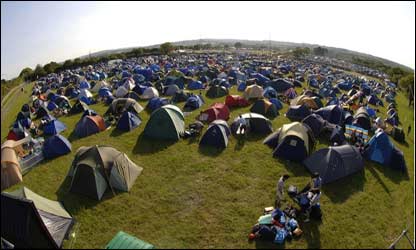 More than 60,000 music fans descended onto the Isle of Wight this weekend for the annual festival – and with rock royalty The Rolling Stones on the bill, it lived up to all expectations.

The Feeling and Groove Armada got the weekend underway on Friday, the night ending with a blistering performance from Snow Patrol – proving to doubters their worth in the headline slot.

Campers awoke to glorious sunshine on Saturday and a surprise appearance by The Red Arrows in the clear blue sky added a touch of something special…
Amy Winehouse and Wolfmother clearly pleased the sunburnt crowd but Saturday’s best performances were undoubtedly left until the end.

Kasabian’s blinding stage presence was rife as ever as Serge and co. belted out songs from their million-selling albums while Muse did what they do best, performing a staggering live set.

Melanie C was perhaps the biggest surprise of the weekend, proving her worth on Sunday’s bill, with a set that went down well.
For Keane fans, it was good to see Tom Chaplin back where he belongs, after a recent stint in rehab, but the constant pleas for singing along were to most people’s annoyance.

And so it was left for the final act of the festival to work their magic…
As a youthful-looking Jagger and Co. bounced onto the stage, with more energy than the days younger performers, the 60,000+ fans roared , relishing in the moment – yes, this really was the Rolling Stones!

Appearing at their first festival for 30 years the wrinkly rockers performed classics Satisfaction and Brown Sugar along with hits from their new album A Bigger Bang.

Paolo Nutini and Amy Winehouse arguably had the highlight of their careers as they both took to the stage to sing duets with the undisputed kings of rock and roll.

And fans unlucky to be at the back of the huge crowd were also in for a treat, as the stage moved into the middle – something rarely seen at a festival.

As the weekend drew to a close the Stones infamous logo beamed onto the stage while fireworks lit up the sky – A spectacular end to a great weekend of music.
The Isle of Wight is back to the festival it was in its heyday!