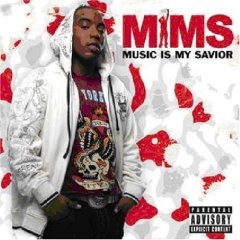 MIMS – Music Is My Saviour

Hailing from Washington Heights, New York, Shawn Mims or MIMS is a producer by trade, coming out of the mixtape scene. His hit single ‘This is Why I’m Hot’ reached No.1 in the USA billboard charts and is the mainstay of this album, which features not one but two remixes.

Claiming to put the ‘fun back into rap’, MIMS’ lyric “Hip Hop ain’t dead we’re just illmatic”, can be seen as a dig at living legend Nas. Despite this, any rumours of disaffection between MIMS, Nas and 50 Cent are little more than rumours in an attempt to garner publicity for the new album.

There is now huge pressure on MIMS to follow up this single with another hit if he is to be taken seriously in the hip-hop circles he now moves in. Whether there is such a single on this CD only sales will tell but ‘Like This’ is seemingly a worthy follow up for RnB, hip hop dance floors around the country. Expect regular rotation on MTV of the new video featuring loadsa cars and b-boy moves. Brap!