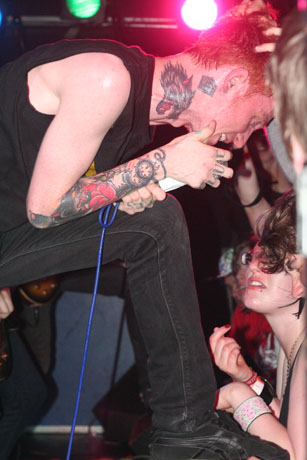 Frank Carter is at breaking point and it’s only date two of this UK tour before Gallows head off to conquer the US of A as part of the colossal WARP tour. He confesses on stage, introducing Black Flag cover Nervous Breakdown, “This song is for Paris Hilton. I lost it the other day just like her.”

All press is cancelled tonight. “I’m just sick of being asked the same questions over and over; people just wanna know the same things all the time.”

On the surface Carter is cool and collected. This is a band that speaks so relaxed in interviews, un-phased, almost laughing. In person they are the antithesis of their stage personas but you can see the effect it is having.

Carter casts a diminutive figure. A colourful character, wide-eyed and alert, neck down covered in intricate tattoos. The guy must only be 22 years old. [Actually 23] He just can’t say ‘No’ to a quick chat because he hasn’t developed that stinking ego to brush me off. Still mingles with the crowd, catching up with friends and this is where I nab him.

I tread carefully and ask about the local Watford scene that spurned Gallows. But Frank hasn’t been home for God knows how long? “Ages ago. Being in America, then Europe, now here, I don’t remember the last time I was home.”

As important as where you may be going in life is where you came from. I tracked down Mikee Goodman. Myspace proves almightily helpful as does Goodman and as for the Watford scene six years ago I couldn’t have found a better source of information. Everyone from Lost Prophets to Capdown played there, not what you’d expect from a junction-gap town on the road to the capital.

Mikee Goodman is revered and renowned by many as the man who started the Watford underground scene, “Watford is such a middle [of the] road place musically and terrible for anything alternative. It has a reputation for beer-fueled nightlife aggro culture.” Mikee was running the Watford underground scene at the turn of the century, just when the young Frank Carter was old enough to get into gigs. The DIY scene united an alternative sound that was not associated with Watford town, not by any stretch of the imagination.

Mikee’s idea was to bring together these various cultures of punk, metal and hardcore that were not getting the exposure they deserved. Bands such as King Prawn, Knuckledust, Earthtone9, Raging Speedhorn, Capdown and Stampin’ Ground were just a few that played these shows organized by the now ex-Sikth frontman.

“So many UK-based bands played that should have got a lot bigger than they did in my opinion, like; King Prawn, Cheese Cake Truck, Dead Life Portrait, Miocene, Vacant Stare and Earthtone9 come to mind straight away.”

The exceptions to this of course are the success stories of Sikth, Captain Everything, Cry for Silence, Gallows and Haunts who by all accounts, are the next best thing to emerge from a scene that hasn’t had the plug pulled on it altogether just yet.

Previous bands of Lags (Laurent Bernard) and bassist Stuart Gili-Ross did feature at these nights before Gallows were still to prominently form and subsequently Gallows did not feature at theses DIY shows while Mikee was still connected to the local scene.

This was six years ago now and the growing success of Sikth forced Goodman to concentrate on his own musical endeavors, “I got signed, so I had to, and wanted to do Sikth full time. Other people started putting shows on. But like in my day, venues kept kicking promoters out until there was nowhere else to play. That was always the problem with having a DIY scene. But that was also exciting for everyone involved. I don’t think much happens there now, which sucks.”

Frank feels the same, “We started out hanging at these nights run by Goodman from Sikth but apart from that, nothing, it’s dead. There were some good bands there.”

The venue tonight is small, smaller than I expected for a band recently gracing the covers of Kerrang and PlayLouder. “We kinda did it on purpose. After all the festivals, we didn’t want it to be too big.” This room holds only 250 people. They have deliberately tried to keep the venues at a level that would sell-out fast, keep the ticket prices down and show the band not from miles away but within touching distance.

You can see how the festival takes a bit away from the Gallows show. Less intimate and Watford’s hero Frank can’t kick everyone in the face, right?
“Yeah, something like that. It’s just not us, you know [festivals] and I’m not actually from Watford, I’m from Hertfordshire.”

There is mounting expectation on these young shoulders as Gallows begin their ascent out of Earth’s orbit. Pressure to keep it going and balance a fine line between work and fun. You can’t just shut it off and get on with it and Carter is feeling it; his outbursts at Download were great to watch but the problems are deeper rooted.

“Definitely [feeling it], not pressure to release singles or make music, just pressure to be something and live up to the hype. We’re not a political band.” Without a motive or cause to follow, people get behind Gallows because of the music and that’s that.

We have more than just the headliners to thank for the gig tonight. Gallows have on tour with them Cancer Bats, one of Canada’s elite hardcore bands. Gallows have developed an affinity with the ‘North American’ hardcore scene, drawing unlikely parallels with the likes of DOA and Alexisonfire.

Touring last time with Send More Paramedics, their guitarist is in the crowd tonight and gets a premature rendition of Happy Birthday, conducted by Carter; Gallows are making friends the worlds over.

Cancer Bats have the riffs, the squeals, and the raw meat, slapped out on stage by the four-piece. “We’ve been aware of them for a long time,” says Carter.

One of the advantages of being in the position Gallows are currently in is as headliners they could sell out the whole tour regardless of local support. In effect the support doesn’t matter one iota but there are people here to watch Cancer Bats, as much if not more than Gallows, such is their reputation in the UK. It is a powerful grotesque message of the way modern hardcore should be.

Sporting an SSS T-shirt, the finest of, and one of only a handful of Liverpool hardcore bands, Gallows are supportive and knowledgeable of the local scenes. “There are some fucking great hardcore bands coming out of Leeds.” Carter spews forth names which are barely audible. I presume he means the likes of D-Rail, Your Fatal Error and The Plight, just a few of the blossoming Leeds underground hardcore scene.

In tracksuit top and a flat-rimmed baseball cap, if you were going to make a toy model of the Gallows singer there would be these two of Carter; pre-show and on-stage. The image is already iconic; Microphone held aloft, tattoos blazing and a fixed stare enough to frighten your parents into keep you home.

The setlist, as far as I can make out, is the same as Download: Abandon Ship, Come Friendly Bombs, Rolling With The Punches, Six Years, Sick Of Feeling Sick, Nervous Breakdown, In The Belly Of A Shark and Orchestra Of Wolves. Stage diving, crowd surfing and circle pits. It’s a punk rock fuelled outpouring of aggression and Gallows race through the set in less than 40 minutes.

After SXSW, Rock AM Ring, Download, it is a wonder they are still intact. The nature of this band by virtue is volatile, but while things are still growing there is no reason to not keep intact. It will be something to watch out for, that this band do not burn out. After all, there are a lot of people who want to see them and only so many times you can have nervous breakdowns on the road. The casualties of the US roads are countless. Hours to drive between shows, Mark E. Smiths said it, that the Brits re just not used to it. “They haven’t got the stamina.” Nine hours to get to the next show? Fuck that! Bands have been lost and new bands have been gathered up along those dusty highways that link all of America together like a giant web.

Staggering out the sweatbox (formerly the Cockpit,) dazed and confused, pumped with adrenaline, tequila and beer, I am haggling with a merch-seller. I am interrupted by Gallows bass player Ross, who has rushed outside to reclaim the bootleg merchandise from the helpless vendor, snatching it away, literally pulling the sheet out from under him. The livelihood of a band on the road, even at Gallows elevated level is supplemented by T-shirt and CD sales. So to see the offstage adrenaline of Ross, spitting pure venom, is no surprise. I try to appear disapproving while fingering the four pounds in my pocket. Good job I never bought one of those shirts!

With tonight’s full line-up set to appear on the lock-up stage at Leeds and Reading, there is the chance to see it all again just around the corner, only in the slightly less intimate surroundings of a big fuck-off field.

NME calls them punk rock; Kerrang calls them a hardcore band. In truth it is the mixture that enables them to be marketed in the UK as ‘the new Clash’ and in the US as the ‘best thing since Sick Of It All’, but what sets Gallows shelves apart from the genres is great songs. It won’t be long before some dickhead gets Sugababes in the studio with a vocal coach and a transcript of Orchestra Of Wolves. Which incidentally, had the band released it proper would have hit number 25 in the charts. The reason they never bothered? “Because the charts are fucking gay.” That’s why.

Gallows should be the band that introduces you to Sick Of It All, Black Flag and Minor Threat, if you haven’t already been initiated, but more importantly to be the band that makes you support your local scene. Maybe what Goodman says about the decline of the Watford DIY scene is the reason this band are so concerned with these pockets of bands and fans dotted around the UK.

We’ll never know how close Gallows or Frank Carter came to blowing this whole trip in Donington, but tonight they are back on track. A band still on the up and as far as flirtations with self-destruction go, it wasn’t the first test for Gallows and it definitely won’t be their last.