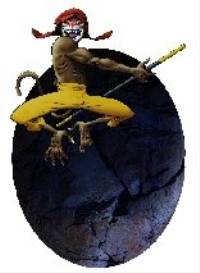 Manchester’s International Festival is proud to host an eclectic mix of artists and performances for this year’s event. The organisers have got it spot on, bringing the likes of Lou Reed and PJ Harvey. There is a lot going on, with scene setting theatre productions, one of which is the brilliant ‘The Pionist’ set in the attic of The Museum of Science and Industry.

One of the main talking points of the festival is the magical Chinese retelling of Monkey: Journey To The West. Damon Albarn and artist/Tank Girl creator Jamie Hewlett have come together to make their Opera debut. Albarn no stranger to modern visuals of music with his success of cartoon band Gorillaz. Albarn forms with Hewlett to produce the opera using western and traditional Chinese instruments.

“Journey To The West dates from 1952. It is a Magical Work, a classic Chinese canon, telling the tale of the most beloved character in all of chinese literature – The Monkey King ,”. Chen Shi-Zheng, Director.

The opening night saw a standing ovation, Glasswerk came a night later to see what all the hype was about.

An intimate atmosphere encapsulated the Manchester Palace Theatre with the crowd eager to be amazed. The show was structured into scenes, like something that you would see in Kill Bill. Tiny subtitles scrolled across the bottom of the stage as Mandarin was spoken throughout on set. Having said this, it wasn’t though the show proved to be deep in a story but it did prove to be more of a visual treat.

A mixture of 50 Chinese acrobats, martial art wizards and bendy Chinese ladies, helped to supply the frenzied 90-minute ‘Rock and Roll Circus’. The main characters that appeared to be at the forefront of the spectacular included a pack of characters, from The Monkey, a Buddhist Monk, a Sand Monster and a Pig. The Monkey looked as though he fitted in to the Manchester backdrop sporting one of Ian Brown’s tracky tops with a bit of a scally laugh.

The show belted through with a mix of visual activities that kept the audience transfixed. There were lots of spinning plate sequences and acrobat fighting scenes. A highlight for some, were the ladies wrapped in red silk dangling from the ceilings creating risqué shapes with their bodies. All sorts of flashes and huge props graced the stage.

The journey itself took the little Monkey from the bottom of the ocean holding a cruise missile, to him fighting large groups of acrobats and thus winning a large fan finding himself at the bottom of a volcano. It all sounds a bit crazy but that’s exactly how the show went, visually intriguing with the Monkey even turning into a bee at one point. The lack of a coherent story may have disappointed but that is what seemed to make the Chinese ethos come out. The cartoon animation screen impressed but did seem very ‘Gorrillaz’ like, although it almost provided a calm distraction from the running about.

The journey ended with a Taoist master willing to instruct the Monkey who was also given the name Sun Wu Kong: the Monkey with the Realisation of Emptiness. Overall the show didn’t produce an easy to follow story for the audience but it did highlight an enchanting experience that was a hint in the way that theatre could be taken into the modern era.

Albarn and Hewlett have crafted a small masterpiece of visuals with a music score cleverly tailored to the set.