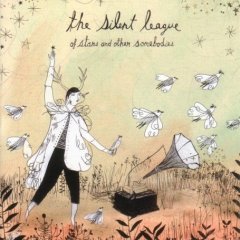 The Silent League – Of Stars and Other Somebodies

The Silent League are one of those bands that you don’t always get the chance to hear about until an enlightened reviewer or friend recommends them to you. Then once they have entered your domain, they fast become one of those few that soundtrack your life.

Hailing from Brooklyn, The Silent League is the brainchild of Justin Russo and was first bought to our attention in 2004 with the debut of ‘The Orchestra, Sadly, Has Refused’. Originally, the ex-keyboardist of Mercury Rev, Russo played an important part in the band’s ‘Deserter’s Songs’ era. The band members include: Shannon Fields, Kevin Thaxton, Jesse Blum, Evan Pazner and Dave Sherman with each casting their own magic upon the music. As now in 2007, we are graced with ‘Of Stars and Other Somebodies’ the second album for the band who are touring as a 6-piece and playing festivals such as Latitude; alongside acts like Arcade Fire, Final Fantasy and Jarvis Cocker.

At first, I thought that the album would be a bit slow and wishy-washy. As the lulling keys on ‘Canary in the Coalmine’ begun the album, I found my mind went back to every James Iha track ever made. Luckily, ‘Victim of Aeroplane’ kicked in and saved me from reaching the tissues with the exciting grandiose and more upbeat sound that you come to expect from bands like the Flaming Lips.

In amongst the track-list, songs like ‘Before You Started’ majestically soar upon you and just as it dawns on you that it can’t possibly get any better than this, ‘Let It Roll’ stops you dead in your tracks. With lyrics that James Mercer and the creative genius Ben Gibbard would be proud of. They are heartbreakingly captivating; nearly to the point of tears.

Altogether, The Silent League are a formidable group of innovative minds. ‘The Tolka, not the Liffey’ has been described as a subdued Sigur Ros-meets-Leonard Bernstein and I couldn’t have put it any better. Sweeping through to the lullaby-like ‘Untied’, there’s something intrinsically special about the craftsmanship of The Silent Leagues’s work. Each song is like a little unique gift, wrapped in shiny wrapping paper delicately covered in little colourful bows and ribbons, and are the kind of presents that you don’t realise you need as much as you do from then on. ‘Of Stars and Other Somebodies’ is really a must-have album.

It is written about life and like life ‘Of Stars and Other Somebodies’ is over before it’s even begun.