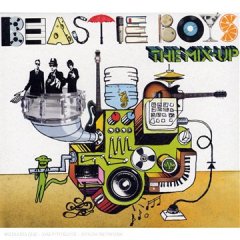 Beastie Boys – The Mix Up

1996 saw the release of a CD that steadily grew on me, to become a personal favourite. ‘The In Sound from Way Out’ by The Beastie Boys (BB) was an unusual release from the NYC b-boys, who strayed from their realm of rock, rap and rhyming to release an instrumental LP filled with funky, jazz fuelled jams. Not only did it showcase their obvious talent as musicians, it highlighted their bold, genre hopping nonchalance. So here we are over a decade later with another instrumental LP. Surely, we’ll be shown some signs of how BB have flourished over the last 11 years that have ultimately, only seen a couple of studio LPs, hits albums, DVDs and a mixtape here or there.

The Mix Up is their 7th studio LP and from the outset, it becomes clear that it’s very much in the same vein as their aforementioned instrumental work. Sources of influence include Public Image Ltd, Gang of Four, The Slits and Killing Joke. I guess we’ll have to take Mike D at his word on that! Carrying a more base level funk/blues sound as it ebbs and flows like a slinky on a sea bed staircase, it’s pulled this way and that through a familiar mental home of deranged and unpredictable dubbing deeds, tempo trickery and scatty structures. As for highlights, well they can only be found in the track titles (Suco de Tangerina, Freaky Hijiki, Dramastically Different The Cousin of Death and The Kangaroo Rat to name but a few) owing largely to the lack of any sonic surprises. This sample free, vocal free and sadly shock free adventure of an LP is every bit the quirky, upbeat background score to your summer BBQ schedule. But it’s not much more. Sorry BB!