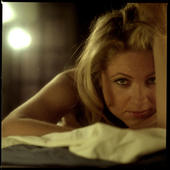 This music is very nice indeed. A smooth, anytime album with a jazzy, trip-hop style that is surely due a renaissance. It’s gentle and coherent with a palatable tempo and an altitude somewhere between earth and dreamland. The star of the show is Gretchen Lieberum, which must surely mean ‘Sia Furler’ in English. Ok, she may not have quite the spellbinding presence and vocal agility of the ex-Zero 7 front person, but there are constant reminders of the wonderful Aussie in Gretchen’s album, ‘Siren Songs’. Her vocal quality gives you the impression that the music has been built around the voice rather than the other way around.

The instrumentation is similarly Zero 7 in style. Each track is saturated with Rhodes and reverbed pianos, all punctuated with conservatively charging break beat drums that would comfortably find permanent residence at a Café del Mar, ‘Hangover Set’ on the balmy beaches of the Balearics (if such a session exists. If not, why not?).

At this point, I would normally start moaning about the lack of an obvious single, but this music has to be enjoyed as an album and should be promoted that way. It’s a 45 minute chill out session which could only be ruined by trying to offer the listener one or two tracks on an EP. She’s in no danger of troubling the Beatles record of consecutive number ones but that doesn’t appear to be the point. This is the sort of music you would hope to hear mid-afternoon at The Big Chill or at some other idyllic setting full of more ‘mature’ festival goers. I’m sure she will get that chance and I’m equally certain that she won’t disappoint.

What we have here is Bond music at it’s best. I can picture a silhouetted dancer surrounded by exciting but harmless flames every time I put it on. It’s so easy to listen to and the laid back, trip-hop nature of the sound is asserted by a cover of Massive Attack’s ‘Teardrop’ which, along with various other old jazz songs, finds its way onto this delightfully chipper musical excursion.