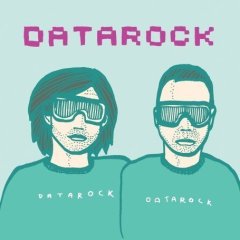 Datarock have been lumped in with the new rave scene but they stand out from the crowd as much as …Trail of Dead would on The Hits on a Sunday afternoon. After ‘Bulldozer’s awesome refrain of “BMX. IS BETTER THAN SEX.” There’s a worry that the rest of the album won’t be album to live up to the opener but then ‘I Used To Dance With My Daddy’ kicks in. It and ‘Fa-Fa-Fa’ are damn good LCD Soundsystem stompers in their own right and ‘Computer Camp Love’ is James Murphy’s version of ‘Golden Skans’. ‘I Will Always Remember You’ is the one good tune you’ll hear all night in Flares, perfect 70’s disco sung by a man you feel yearns for a bit of death. ‘Princess’ is a bit too similar to The Cure’s ‘Close To You’ but allowances need to be given when the rest of the album’s this good.

The future of indie disco? Nowhere near. This is way too diverse and far, far better than most of the shite under the new rave/dance banner at the moment. While it’s not as good as Justice’s ‘†’ and nowhere near as amazing as Muscle’s debut threatens to be in August, this beats the crap out of ‘Myths Of The Near Future’ and the like. Why are Datarock not huge already?