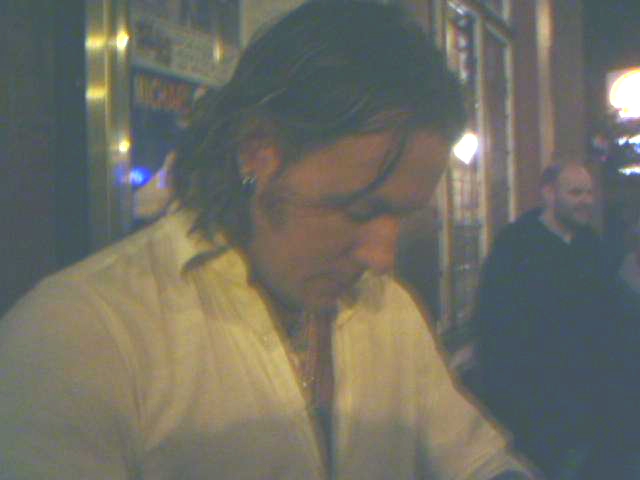 How can one man and a guitar sound so good? If you’re Steve Carlson, you not only make it sound good – you make it look easy. The guitar playing is virtuoso, the words penetrate deep inside, the voice is gravelly and honest yet still with the ability to be sweet and tender – or to punch a hole in the stratosphere – whichever the lyrics demand. The recordings are stellar but believe me, the live performance surpasses them. The audience was swept along from the first to the last on a fast flowing tide under the guidance of a deft captain.

From the opening chords of “If It Ain’t Easy” right through to the encore, a burn-down-the-house rendition of “Johnny be Good”, we were treated to the best of Folk Rock, Blues, Jazz, Soul – just what kind of musical genre does this guy belong to anyhow? Who cares when it’s so expertly performed? Categories are pointless and you might as well try to catch air in a butterfly net, or pin a cloud to the ground, as to pigeonhole Steve Carlson. Only one category fits him to a ‘T’ – that of Singer/Songwriter and performer par excellence.

With ballads such as “Under You”, “Piñata Novia”, ” Don’t Move On” and “Radio In My Head”, stonking good ‘rip-it-up’ rock numbers such as “Sounds So Good”, “Hole In Me”, “Wasted Jamie” and “Rocking Chair”, not to mention the first outing for a new song “The One That Got Away” and the best version of the old Zombies’ classic “She’s Not There” you’ll ever hear – EVER – we were kept on a high all night long.

Steve’s easy manner and approachability don’t hide the fact that this is a man who is hard-core serious about his music. The sell out crowd at The Half Moon couldn’t have been better entertained – and yet it felt less like a show than a party, a reunion of old friends.

The audience came from London, The Midlands, East Anglia, Scotland, Germany, Belgium – indeed all four corners of the globe – to share the love; and to join their voices to Steve’s as he announced that he was recording a couple of numbers for a new CD – with audience participation mandatory, no one demurred.

The Half Moon is a great venue, some of the biggest names in music have played/play here:- Roger Daltry, Alexis Korner, The Strawbs, John Mayall, Kasabian – to name a few. Steve Carlson deserves to be up there with the brightest and the best. If there’s any justice in the world he will be.