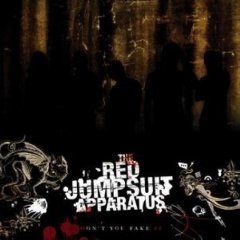 The Red Jumpsuit Apparatus – Don’t You Fake It

Oh god. The bosses at Kerrang! TV must be pissing their pants about this band. Like a ridiculously-monikered cross between Paramore and Madina Lake, they’re mincing their way across the music scene to the delight of angsty teenagers up and down the country. Great.

Yeah sure, it’s not bad music in itself, but then again outside of the genocide, xenophobia and fascism I’m Hitler wasn’t a bad guy. It’s the pushing of an ideology that counts, and it seems that these guys are throwing their weight behind all the hand-clapping, melodic, monotonous poppy shite that makes everyone over 17 want to kill themselves. Yes I’m sure they’re talented – the drummer even dains to briefly move away from the general pop-punk standard from time to time and when he does, he proves that he can actually play – but its all so depressingly trite. Oh look, they’re talking about domestic violence! What’s that? It’s a bad idea? What a revelation!

The music’s had its time, the topics have been covered, and the image has already saturated life as we know it. Yeah, its fine, but its more pointless than putting lipstick on John Merrick.