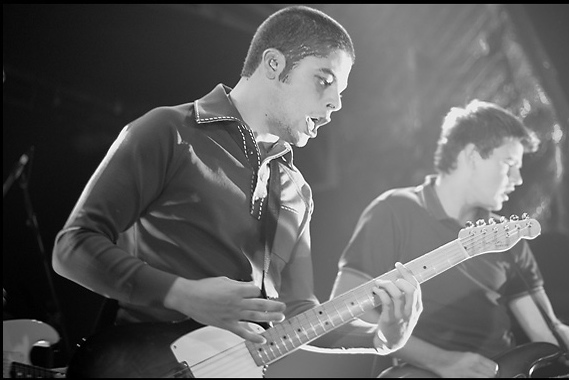 If you walked into the Soul Tree in Cambridge last Wednesday night by chance you might have found yourself wondering which big name had come to Cambridge just to play a small venue for the hell of it. Arriving after the support act, the place was already rammed wall to wall.

So rammed in fact everyone must have been dehydrated as there was no way through to the bar. The 60s appearance on stage only served for everyone to jostle up closer together to catch some of their funky ska sounds. It seems that the Dead 60s have developed quite a following since their name change in 2003 and quite right too. They provided the audience with their money’s worth of music and more. Standing squashed at the back the sweaty atmosphere only served to help the crowd let loose and soon the entire room was bouncing, it was as if the band had promised their instruments to whoever could lose the stand around, toe tapping attitude first. Having previously been likened to the Clash, this evening’s performance of ‘I Fought The Law’ was like walking into the jungle and meeting Bob Marley and The Killers for a punk rock tea party. Matt McManamon and Charlie Turner’s voices were perfect and the plucky, juicy guitar sounds reverberated around the room and with the heat building, knocked the crowd around with them. As the last riffs of ‘Stand Up’ played, it was impossible to deny that it’s only a matter of time before the Dead 60s get thrown into the mainstream, and lets just hope it doesn’t go to their heads. The 60s may be dead, but this band certainly isn’t.