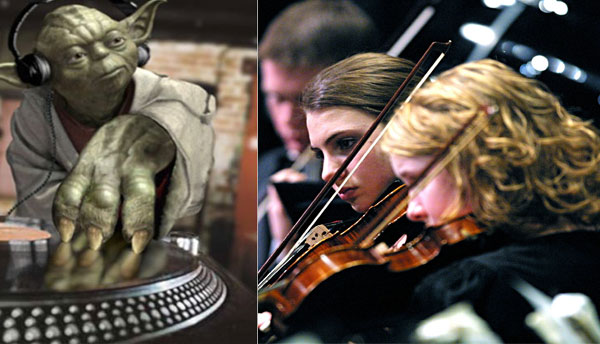 The orchestra fill the stage with strings, a brass section, double bass, xylophone and more. This makes for an impressive visual presence in a dance venue and means that the performance is perhaps best watched from the raised areas, rather than the dance floor.
The music is a performance of Gabriel Prokofiev’s ‘Concerto for Turntables & Orchestra’ and is divided into acts more reminiscent of a classical performance than a traditional set. It’s obvious that a lot of work has gone into rehearsals for this performance and footage of the sessions makes up the video backdrop of the stage.

It’s the xylophone that makes the first impression; it’s light, almost bell–like tones being a key sound of the night for me. The orchestra build a rich, organic sound that ebbs & swells. On some of the quieter, more reflective tracks it puts me in mind of the Cinematic Orchestra. As the music builds in waves, the double bass provides a rumbling undertone. The (young) conductor is positioned at the front of the stage, with his back to the audience. His emphatic gestures to the orchestra work just as effectively for the crowd and there’s a tangible sense of excitement as he counts the full orchestra back in as a track returns to it’s central theme. Like the breakdown on a dance track, it’s the texture created by adding and removing parts of the sound that make it more dynamic and the ten – minute duration of the songs give plenty of room to explore the range of the instruments.

When it’s time to step it up Plaid & O Duo provide some tight beats and someone’s done a great job on the sound because the breaks sound crisp and clear like a recording. It’s at these moments that the crossover element of the performance comes fully into it’s own, making a real fusion of dance music & orchestra. Something else that gets the crowd going is the solo performances, most notably from the sax. Apparently these are largely improvised and the virtuoso display is fully appreciated; although it’s not the only time that applause breaks out mid – way through a tune. Personally I’d have liked to hear more from the rest of the brass section, especially the trumpet but there’s no denying that what is here works.

The electronic elements of the music are subtly used, the focus being on letting the instruments breathe. At times the guys behind the dials look a little nervous or perhaps just intense; again it’s clear that a lot of work has gone into the organisation of this concerto and it’s got to be an adjustment for those used to playing alone to coordinate as part of a large team. They pull it off well tonight though.

In all it was a really good night, refreshingly different and very well received by the crowd. It would have been nice if there had been more of an age range in the audience: it seemed the dance crowd was more heavily represented in comparison to the orchestra fans but with any luck as word gets around that might change. Hopefully more composers will step forward to score music for these type of events because it’s an idea which has been a long time coming and undoubtedly has the potential to continue to develop in the future.

If you fancy something a little different or want to see just how far the dance (or orchestral) envelope can be pushed then I recommend checking it out soon.