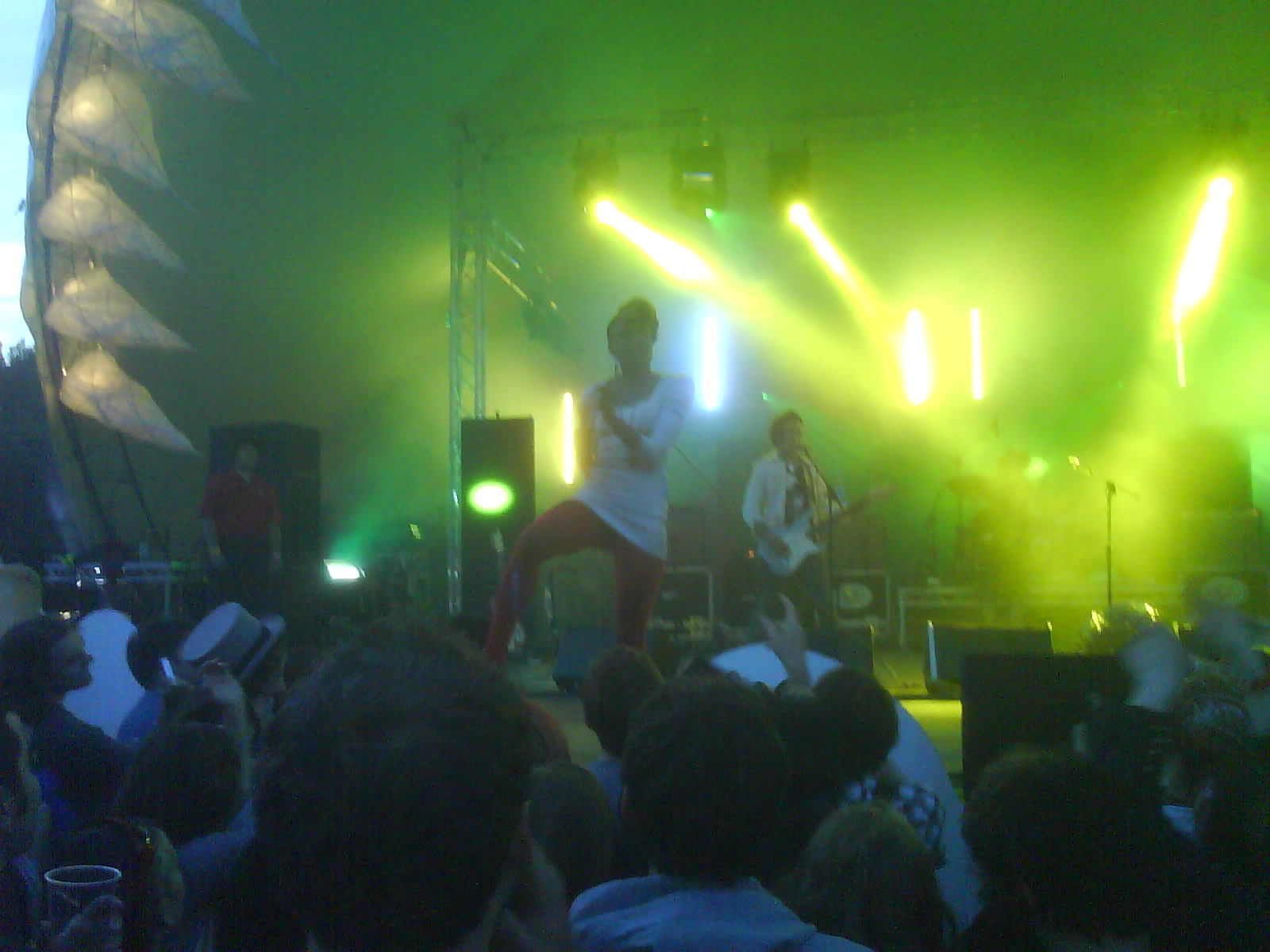 “Kate Nash has pulled out because her PR Company believes she is too big for the Secret Garden.” The Living Room tent running order board.

Despite that despicable sell out Secret Garden easily lived up to its growing hype. With only 6,000 tickets it is one of very few places in the world to get within metres of the very best new bands and a few real legends. Highlights came thick and fast every night and during the day some big talents grew stronger. There is no doubt the Gardeners have found artists who will be riding high before long and some have already crashed the charts since booking. Blessed with sunshine all weekend except for a downpour on Saturday, the atmosphere here can’t be beaten.

Noisettes – pictured on the spectacular shark mouth styled Great Stage – played the Garden in 2005 and returned this year to headline Friday night as indisputable band of the weekend. They had the maddest mosh pit and tunes to send us wild every time the guitars rocked and lead girl Shingai Shoniwa belted out her fantastic lyrics and danced her wicked dance. They recall a rawer Go Team. She declared this festival the best and no one was arguing. Right before an ageing Echo and the Bunnymen played a set to a smaller but engrossed crowd and as the sun set ‘Nothing Ever Lasts For Ever’ was a real moment. Reverend and The Makers have recently hit the big time but they don’t have the ego of others so didn’t pull the set. Instead they gave us an hour of Yorkshire dance to the highest degree and ‘Champion of the World’ is some anthem. “I could have been a CONTENDER!!!” Long live the Rev.

Saturday night was the night for the many new ravers to don the neon and get down in the rain. Not that they stood out. The majority are in fancy dress or no dress or boys in dresses! They went to some lengths and make it a special sight. Super heroes, mud divers, Hannibal, finger hats!? And it only got stranger. This place is full of oddness. People get reduced entry by providing their own action camp where they must provide entertainment for us all weekend. Thus, we were treated to the Suicide Sports Club riding down muddy hills on kids bikes straight in rivers and bins; a group of undertakers walking around the site with a coffin playing dance music; during the New York Fund’s set a group hit hundreds of colored balls into the audience, which made for some spectacle in the sun. There was a make your own tombstone tent, orange tent – “no orange, no entry” and that is just the start of the tomfoolery. And so with this all going on we danced like lunatics to the best in new indie, dance. First up New Young Pony Club proved they could take the charts hostage with some of the grooviest tunes around. The Sunshine Underground managed to almost match that performance, which was no easy task. Their euphoric lad rave drew the weekend’s biggest crowd and the music just soared. The rain couldn’t get close to spoiling such perfect new music.

And so to the only artist who could ever come close to challenging the Noisettes. Mark Lanegan and Isobel Campbell produced one of the finest albums in recent history and their booking for this festival was some coup. Their work before for Belle and Sebastian, Queens of the Stone Age and the Screaming Trees makes this pairing pretty much untouchable. Sadly the organizers had booked I’m From Barcelona to precede the geniuses and almost got the show cancelled. The sunshine poppers from Sweden may have made a huge crowd jump around in the sun, but any band that can dish out those horrendous lyrics and stand unashamedly selling merchandise at the front of the stage – mainly to over excited children – while the roadies are trying to set up for a real band don’t deserve the reaction they received. You should have seen Lanegan’s face. Isobel – for one with such a sweet voice – almost challenged in pissed off stakes and with such dross before and a mostly departed crowd it would have been no surprise if they had simply gone home in disgust. In the end it was relief and the short set was something to remember. Lanegan looked awful, pasty white face, dressed all in black (coat, wooly hat) on a hot day but his voice can send a grown man close to tears. They gave us six of the best from ‘Ballad of the Broken Seas’. The crowd had swelled and stood enthralled and bemused as we got two passing “thanks” from Isobel and nowt from Mark. He stood tattooed hands stuck to microphone all set. But that’s what you want from rock stars. Not a big love in. Here the music needs some atmosphere and emotion of the morbid variety. The musicianship was stunning and both voices simply mesmerizing. All was superb but ‘Revolver’ and ‘Honey Child What Can I Do?’ took the set to another place. Following a beautiful ‘Ramblin’ Man’ they went for a drink and Lanegan – with a jerk of the hand – departed stage left and with a shrug from Isobel, two of music’s enigmas were gone. Also on our way back to reality we squeezed into a rammed Living Room tent to watch Glasswerk’s big tip for success Kate Walsh . While we ate crumpets and jam she received one of the best receptions of the weekend for her sweet folksy acoustic ballads. Her new album ‘Tim’s House’ made number one in the Itunes chart and with a voice and lyrics as beautiful as hers more success is coming.

The weekend is about more than money making and commercial bands going through the motions (Kate Nash take note). Here we see the cream of new bands but also strange performers who will never make it big but have a yearly slot here where their brilliant music is received as positively as the big timers. If you ever have the chance watch Earl ‘sex symbol’ Okin – who could charm the pants off anything despite looking rather odd and being an accountant from London – then do it. His Sinatra like and lost classic Bossa Nova numbers really give variety as do the annual shows from Tallulah Rendall and the Rotating Leslies among others. Isn’t it fantastic to be able to go to a festival and rediscover acts like old friends? Surprises and new finds were many here and if you ever want to be uplifted or bank on one group making it then go for ‘Kitty, Daisy and Lewis’ a retro act belting out rockabilly jive music. The fact they are all fourteen years old is astounding. Their voices and instrument skill belie their years. Their happiness and music was infectious as was the spirit of the Secret Garden Party. Another year, another planet.