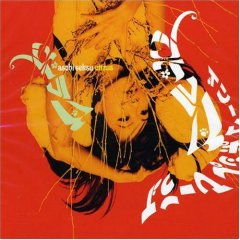 The second album from a band whose name means ‘playful sex’ in Japanese, you could be forgiven for thinking this was going to be some Asian CSS-style “suck my art-hole” stuff. It ain’t.

‘New Years’ sets the standard for the album by being about as close as anyone’s come to recreating the Flaming Lips sound of their ‘Hit to Death…’
phase. Huge guitars that seem to float in, beat the shit out of everything their way and then leave, having made friends with the battered. ‘Thursday’
carries on from the previous track and ‘mid 90’s Flaming Lips’ seems the obvious reference point for most of this album. And with a formula like that you’d have to be as dumb and obvious as The Enemy not to make at least an interesting album.

They’ve nicked the bass that starts up half way through ‘Strings’ straight from The Crystals’ ‘Then He Kissed Me’ but when you’re stealing from a tune as good as that who can complain.

They’re also wonderfully weird. The brilliantly named ‘Pink Cloud Tracing Paper’s lyrics are “staring down with empty eyes, left breathing deep and high, hard at work calling signs, swaying strings of coloured lines.” And that’s it. There’s not much to dissect there but Christ it’s too complex for me.

Ok, there’s maybe a bit too much aimless feedback on this and at 50 mins plus its too long with a couple of duff tracks (‘Goodbye’). But then you get ‘Lions and Tigers’ straight after with its brilliantly dreamy pop to fall in love to.