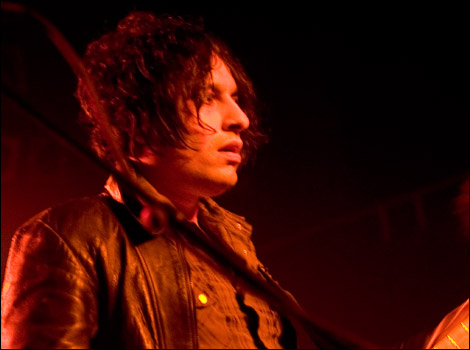 Metro and Straitjackets are local heroes from different clicks. The Straitjackets are from the Inner City Sumo alt punk scene and Metro from the prog metal explosion curdled in Elevator studios. What they both have in common is they are DIY bands with punk ethics. It seems Eighties have chosen this way of life rather than the limelight that beckoned and called when they first came out with Horse of The Dog at the turn of the century. Since then they have self-deprecated down the ladder clawing away from the attention to the stage where they are almost putting out their own records. They always had a say through No Death when the first two albums came out but the new EP ‘In The Garden’ is an even more lo-fi output and it does their credibility no harm at all.

As Metro Manila Aide take the stage, the people are arriving. It’s still early on Friday night and people are wondering who the screaming banshee is on stage? Then they realize it is Metro’s iconic front man Paul Metro, and it all makes sense. It gives the ideal image, if you don’t already know this band you will do and once you do, their music is part of your life, whether you like it or not. They appear in the most unlikely of places as they zig-zag their way up and out of the local scene, it’s true this band will never forget their roots. Tonight they include new Track ‘Queen Bee’ and their upcoming video release ‘Immortality’.

Main support The Straitjackets are a more fitting act to play alongside the headliners. Their self-styled brand of psychobilly punk is a flat-out distorted skiffle rumble. The first time many of the hometown have seen the band with Andy, the new drummer, who’s been in the band since god knows when? The play to a packed out room one of their best gigs to date, the highlight of which being old Glasswerk.co.uk favourite ‘My Baby got Killed by a Landmine’.

When Eighties Matchbox take the stage, McKnight is already riled and offensive; their aim is to get in the faces of the audience as they launch into new EP title track ‘In The Garden’. The room explodes with it’s introduction but it’s still the older songs that are more recognized.
They rattle through Psychosis Safari, Chicken and Mister Mental before most are aware what’s happening. The crowd is going chronically mental. There are two types here: Those who go mental and throw themselves at the band and each other and those who go mental standing there. The band are more collected than they have appeared in recent years on tour. Is it sign of maturity, age or professionalism creeping in? Even down to their dress which is more glam, sequined and flared than the black gothic drab usually associated with the band. Saving Celebrate Your Mother until last they rise to the challenge of impressing an audience and succeed in blowing away everybody in the room. They still don’t do encores and they still don’t play Rise of the Eagles.