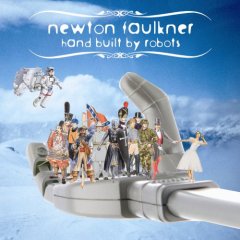 17 tracks. 43 minutes. 1 man. Hand Built By Robots (HBBR) is the debut album by 22 year old British-born singer/songwriter Newton Faulkner, who promises to be one of the unique voices of 2007.

As full names go, Sam Newton Battenberg Faulkner, I understand why he may have decided to shorten it! This local lad, to me anyway, hails from Surrey. He graduated at the Academy of Contemporary Music (ACM) in Guildford and finally it seems success won’t be too far off. Just having achieved a Top 20 Hit and with an intensely beautiful debut album like HBBR, he undoubtedly has more future sensations in store.

His weapon of choice is the acoustic guitar, knowing that you’d assume his sound is alt-rock but you’ll find that he heralds a wider range of styles and influences. Stunningly brilliant, he entices us with a guitar solo ‘Intro’ leading us straight into what is essentially an incredibly genuine personal album. Cascading with ‘To The Light’, uplifting and positively jazzy, it echoes the trademark sound of Jack Jackson and Donovan Frankenreiter, both of whom he supported in the past shows.

With an exciting Brit-twang, his first single ‘I Need Something’ is one of those songs you listen to completely stunned and memorised. Enthusing benevolence and understanding, his lyrics pacify you as you come to accept that this guy has read your inner-most thoughts. Having created something so completely passionate, yet at just the right balance so it’s not overwhelming you, Newton sings to us from his heart. You will feel and hear this as you delve deeper into the album.

‘All I Got’ is more folksy, chilled and downbeat, but dynamically light-hearted and energetic. ‘Dream Catch Me’, his second and latest single, has the same Snow Patrol grandeur and epic balladry, but Newton brings a more optimistic in message and spirit. Complimenting such buoyant tracks with the more soulful sound like that of US folk singer/songwriter Ray LaMontagne. Listen to the delicately serene ‘Feels Like Home’ and ‘Uncomfortably Slow’ as Newton Faulkner proves that he makes folk-pop stand out from the masses. With an exceptional cover of Massive Attack’s ‘Teardrop’, Newton gives it a harrowing almost spiritual take that Elbow had previously bestowed upon it. Unbelievably, it sounds darker than on Mezzanine, which is an incredible feat within itself as the original is dark enough! Credit should be given to Newton as he reaches within himself to truly make something new out of a classic.

Wild cards, like the eccentric ‘Gone In The Morning’ will bring a smile on your face if not a couple of laughs. It’s one of my favourites; I could never get tired of it. ‘Sitar-y Thing’ confirms Newton has a vast spectrum of influences and his talents are beyond basic guitar. Standing out like a shooting star in a star-filled shy, Newton’s ‘Straight Towards The Sun’ plays like a Placebo cover in slow motion. As the latter half of the album voices varying styles that come into play. ‘She Got Time’ follows the footsteps of old school folk/blues, so wonderfully Bob Dylan-esqe. Then, leaping into the more experimental ‘U.F.O.’, an important track in Newton’s career, the title-track for a five-track EP released in 2006. Sitar-aided, there’s an ethereal and hippy-tripping feel about it.

He finishes the album with instrumental ‘Face (Her)’ which is followed-by the gentle acoustic goodness on ‘Ageing Superhero’. Finally, it’s ‘Lullaby’ that’ll have you emotionally ruined but on the whole inspired. Hotly tripped and no wonder; Newton Faulkner is good for your soul.