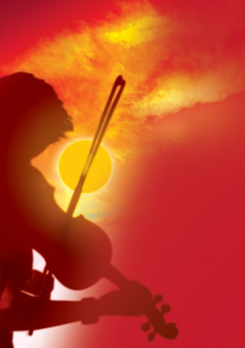 Festivals are wonderful things, truly. How else can you see so many diverse performances in a short space of time? The atmosphere is always a buzz, and even bad weather doesn’t often manage to dampen spirits enough to mar the occasion. This year’s Cambridge Folk Festival was no exception – though the problems with ticket allocation early in the proceedings certainly didn’t help much! However by the time the big event arrived most seemed to have more important things on their minds – like how to organise their schedule between the two main stages and the club tent. So many people to see and so little time available!

Unable to procure (or afford) tickets for the whole weekend we did however manage to secure some for Sunday. So although we were unable to see Joan Baez or Steve Earle, this year’s headline draws, we did have the intense pleasure of seeing class acts such as Ruthie Foster, Ricky Skaggs, Nanci Griffith, James Hunter, Toumani Diabate, Shooglenifty and Bellowhead, along with 10,000 other enthusiastic festival goers.

Ruthie Foster:
This woman has a sublime voice and she used it to great effect on Sunday. Her strong Blues vocals alternatively kicked in the gut and warmed the heart. Her rendition of ‘Oh Susanna’ left me standing with mouth wide open.Her new album is entitled The Phenomenal Ruthie Foster, which title she richly deserves.

Ricky Skaggs and Kentucky Thunder:
Ricky Skaggs is a bluegrass phenomenon extraordinaire, and has long been on the list of people I wanted to see live. Surprisingly, given his giant stature as a musician, this was his first appearance at the Festival. The vigour and exaltation of this performance, certainly did not disappoint. The crowd were on their feet and bopping for the band’s entire set and they left us wanting more…Ricky commented that he’d love to come back again soon. I certainly hope he does – festival committee please take note.

James Hunter:
This was a very nice surprise. I’d not come across him before, though quite how this performer – who toured extensively with Van Morrison in the 90s- slipped past my radar until now I’m not sure. Suffice it to say he is well and truly in my sights now. His style is best described as a modern take on 50s and early 60s R&B. He was nominated for a Grammy last year – with luck he’ll not only be nominated next year, he’ll win one too.

Toumani Diabate & Symmetric Orchestra:
We all think we know by now what to expect from musicians from Mali, and sometimes we’re quite wrong. This act started slow and built to a thundering crescendo. It’s a struggle to find comparisons for those who weren’t there to hear it- but consider Tubular Bells, if only for the hypnotic effect, and add a side of Weather Report’s Birdland and you might get some idea of the sort of thing we’re talking about….perhaps. Toumani himself is a virtuoso player of the Kora a 21 stringed instrument which is a cross between a harp and a lute, made from a gourd and strung with fishing line! The solo improvisation – of about 20 minutes duration- with which he closed the set was breathtaking in its complexity. Not at all surprising that he has won a Grammy.

Nanci Griffith:
This Texan always warms my heart with her thoughtful and thought provoking songs. At the forefront of Country and Folk for almost 30 years she has grown in stature as a performer. Her vocals in particular are stronger and more polished than ever before, whilst still retaining their lilting and tender quality. It was a great pity then that whoever was in control of sound for this set did her such a disservice as to whack up the backing musicians’ (her Blue Moon Orchestra) level to the extent that, once they were all playing, Nanci’s superb voice was almost completely obliterated. Fortunately there were occasions when she sang with just a guitar or piano accompaniment and we got the full effect – all the more irritating to know that we were missing so much when the whole group were playing together. The audience didn’t hold it against her though and she got the biggest cheer of the evening.

These two groups certainly fall in to that category. These two bands are hugely popular having won in Radio Two’s Folk Awards both this year and last. Playing both traditional and original folk tunes they provided the younger members of the crowd with a knees up opportunity. Folk moshing anyone?

Undoubtedly fine musicians, they still did not capture the heart of the festival for me, call me old fashioned – but if you have to rely on such things as flashing lights and hats with sharks on to provide the ‘buzz’ that Ricky Skaggs gets with one mandolin, then you still need to put some work in. That said, those who stayed for their complete sets clearly had a good time.

Festivals, as I said, are a good thing – more of what you fancy, some new stuff you never knew you liked and a bit of a knees up. And when you think of the variety of music you can see in one day, its actually very good value for money. What more can you ask for really?