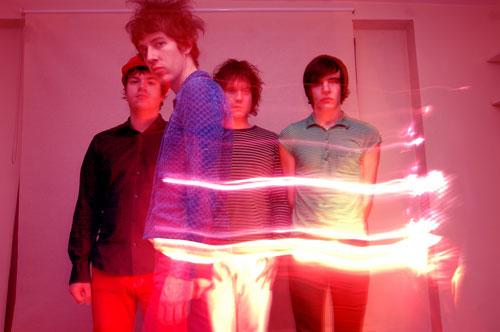 The Kingsland road must have seemed like a desolate landscape this evening with its well mannered art school contingent climbing out of bed and hot stepping it down to Soho in aid of myspace group du jour Twisted Charm who come well prepared with the valuable fashion advice gained from a recent Klaxons tour under their second hand belts.

Now I’m not usually a betting man but I’d have put money on Kenny G’s accountant having literally creamed himself if he could have seen how much brass was on show this evening. Admittedly the fact that Twisted Charms Luke Georgiou tickles his spit key for Lolita inspired support ‘Ipso Facto’ might seem like cheating but its a notion that becomes completely redundant the second instrumental freaky dance jazz rockers ‘Chik Budo’ peel on to the stage with not one but two sax-a-ma-phones and during the course of their set more than make up for a bit of moonlighting.

A few cheap drinks later and stocky drummer boy Dominic Cole emerges from within the TC ranks before strutting over to his stripped own drum kit, leather clad hands at the ready to bash the ‘bejesus’ out of his bare essentials. Clearly lacking in finesse, Dom it would seem takes his frustration at being that little bit more squat than the really pretty girls care for on whatever you put in front of him which works for now but eventually becomes the kind of monotonous barely time keeping battery you’d expect from a spoilt teen. It might seem a little harsh but I struggle to take Twisted Charm as seriously as they might like, its not for the derivatively jagged riffing that my brow furrows but more the general lack of tact it takes to force pretty much all the subject matter of Debut Album ‘Boring Lifestyles’ off your tongue, over your teeth into the ether. So where’s the market for this particular brand of psudeo-intelectual social commentary. Of course it’s with the kiddies who complete with a lack of cynicism filter lap up the idea the absolutely everything is rubbish. That’s right it’s all shit, oh apart from that show ‘Skins’ that I can so relate to.

So the benignly morose drivel continues with shards of hope gleaned from the off key saxophone squeekathon, which at times liberates Twisted Charm beyond the point of being whingey wannabes. So how come Morrissey gets away with it and drummer Doms Brother Nathon doesn’t? The simple answer is that Twisted Charm lack the Charm. It’s all very well to portray a substandard modern existence across six or so art-punky dance numbers, but a least do it with style, some wit and slightly more thought than it takes a page three girl to get her boobs out.

If you want to explore ideas about the more than questionable integrity of London’s seemingly fractured populous be my guest but really attack it with some vigour don’t just get a bit stroppy and slip it the secret V’s. It’s the musical tantrums of ‘London Scene?’ and ‘Happy Alone’ that I think ultimately end up disheartening truly potential fans instead of empowering them with a sense of camaraderie that can add substance to being melancholic. Constantly picking holes tends to distract you from realizing that for all its cruel truths life at times can pull some redeeming features out of the bag, not that it matters to the un-avoidably self indulgent core fan base of Twisted Charm because they’re too busy agonising over whether or not its ok to kiss boys if you are yourself a boy or what excuse you can give tomorrow for not having done your homework. Eeeeeeeek!

Well that’s one point of view…one not shared by Twisted Charm’s huge internet and live following. If you disagree or want to side with Seb write in and tell us what Twisted Charm and lead man Nathan ‘Doom’ Cole mean to you. One thing’s for sure, they always produce a strong reaction. So make sure you at least give the Charm a listen.