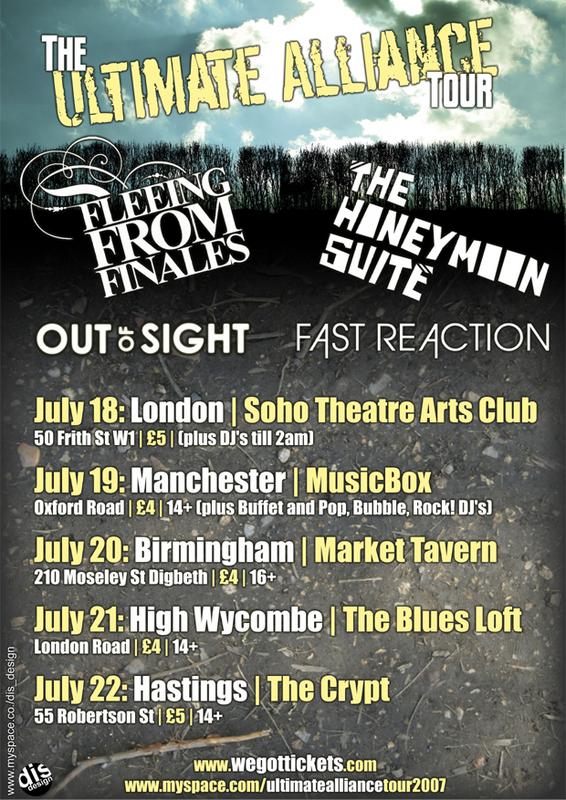 The saying “save the best till last” really rang true with the performances of all four bands at The Crypt, on the last night of 2007’s Ultimate Alliance Tour.

Having played in all the band’s hometowns and a show in London, tonight was Out Of Sight’s turn to open up the action. Despite a stellar performance, the crown seemed to be a let down for what had been an awesome tour.

Fast Reaction, it has to be said, have been the band on this tour that have gained the most fans. Again, this evening they played a fantastic set, full of catchy tunes and energy, but the audience need not have turned up, for the appreciation they showed.

The Honeymoon Suite, Manchester’s pop-punk princes were the main support, and from the moment they came on stage it was as if there was an entirely different audience present. To say that singer “Melon” had them wrapped around his little finger was an understatement. Right from the start of their set they had the crowd participating, and a full-blown mosh-pit. The highlight was certainly halfway through a song, in the middle of the set, Melon got the entire crowd sitting down cross-legged on the floor as if he was having story time, not playing a show! They sure got performance of the night, with the spectacular showmanship of the set.

Fleeing From Finales headlined their hometown show, and aside from now having a well warmed-up crowd, the announcement that it was frontman Sam Little’s birthday put that extra air of excitement about. A truly superb performance, despite a technological malfunction leading to broken keyboards, and it was topped off by a incredible finale of all four bands on stage for a noisy, exciting rendition of the crowd’s favourite song.

Once the main obstacle of a truly boring crowd was overcome, it was a truly great overture of the tour. It proved that all four bands have the potential to get somewhere, and it also makes the stand out point that British pop-punk is not dead.