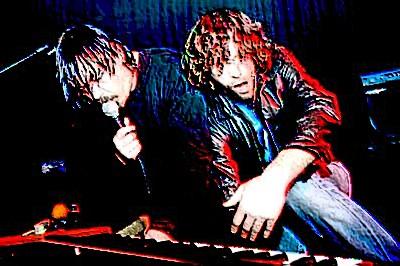 Men shagging mics. It doesn’t happen very often but when it does you’re damn glad you’re there. Unfortunately Melodie Du Kronk were on first and although two girls and two guys playing out the theme tune to Streets Of Rage may sound like a pretty decent support band it was in fact a bit shite. Having no vocals for the massive majority of your songs is a controversial decision but having no actual tunes either is just a bid stupid.

At times it seemed like you were listening to either the Supermarket Sweep theme or some cats meowing and either way it didn’t work. They looked good but there’s way too much going on and the constant tuneless electro grated quickly.

So onto the mice screwing and zZz – one of the oddest bands in quite a while.
The two-piece looked like Benicio Del Toro in Fear and Loathing and Steve Buscemi’s mate from Fargo and damn it it worked brilliantly. Dark, dark electro filled the Barfly and you got the same sense of having no clue of what would happen next as you did when you first saw Clockwork Orange. Lead singer and drummer Tjees lost two drumsticks and blew the amps in one song and he seemed to get enraged and immersed in the music the same way that James Murphy does and although its near blasphemous to say, you had a sense of how exciting it must have been to see The Doors back in the day.

‘Ecstasy’ was incredible and zZz often reminded of ‘Kowalski’-era Primal Scream but it was the last ten minutes that really made the gig stand out.
Tjees sat down for ages then put the mic in his mouth, smashed his drums to pieces and sang in some God knows how to describe way. He then shoved it down his pants, gave it a little seeing to, pulled it out of his trouser leg back into his mouth and screamed. Awesome. Two people should not be able to make a noise as big, or as good, as this.