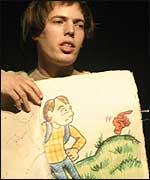 NYC must be undergoing some sort of underground punk scene rebirth. I’ve only two examples to speak of, but there’s surely more to follow all the others that I’m not aware of, as well as the two I’m slowly and distractedly building up to. Brooklyn’s very own Dirty Projectors have reworked a 1981 LP called ‘Damaged’ (‘Rise Above’ is out 8/10/07) by Black Flag. Here we find our folk fuelled friend Jeffrey Lewis (JL) covering; yes you guessed it, twelve songs by Crass. So watch this space folks ‘cause, just like the wonderful indie world, the freaky field of alternate folk is also about to get an attitude driven rocket up the Khyber! No…arse! There’s a time and a place for pleasantry, isn’t there? Let me know if you ever get there!

1993 saw freshman JL sharing rooms with a Crass favouring skinhead, with whom he became good friends. The rest, as they say, is history. Cut to 2007. October 1st. JL releases his fourth, bolder and finely crafted forty two minute LP ‘12 Crass Songs’.
Subtle electronica, succinct orchestration and trademark JL acoustics play backdrop to some dually layered lyrics that are intermittently delivered defiantly and deftly like a flashback to Velvet Undergrounds ‘The Gift’ and its mind numbing Lou Reed / Moe Tucker onslaught. Just to hear two naive sounding voices running parallel to one another as they spit out profanity to within an inch of perfection is mesmerising in its own right.

Whilst the anarchic punk sounds of Crass are gone, their stone cold attitude remains intact. And with JLs unique immediacy behind each seemingly befitting rant, its overall effect is awesome. Taking on new dimensions of ‘real ‘world importance whilst maintaining its psychedelic underground integrity, it’s a non commercial album to suit most tastes. Varying moments of funeral parlour music (‘I Aint Thick’), Ivor Cutler styled moments (‘Demoncratz’), chaotic, no holds barred moments (‘Big A’) and startlingly unexpected moments of disco driven acid jazz (‘Walls’) can be found on this refreshing album that bristles with a seldom found ramshackle vitality.

Effectively processed over the last fourteen years, this album has been well worth the wait. Most people, me admittedly included, will prefer JLs quirkier, innocent eyed tales of drug induced delirium. But here, he offers up some riotous spirit and spurns his somewhat sillier side to succumb to his no less sordid but definitely spite stoked self. All hail Jeffrey Lewis!!!