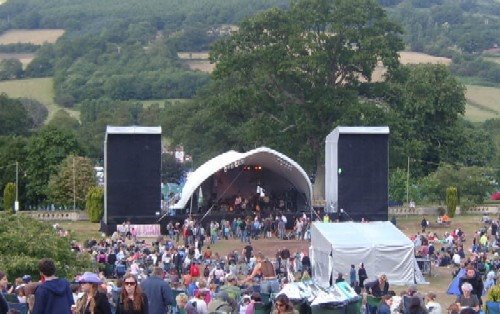 Well it’s official. This years Green Man was the wettest festival since the ill-fated Mariana Trench Fest’ of 1996. Nestled in the Brecon Beacons, the views, as one of my mates quite beautifully put it, ‘make you want to write poetry and shit’. And he’s right, you know.

Billed as a folk festival, you only have to take one look at the line-up to see that it is much more than that, with artists such as Steven Malkmus, Dead Meadow and Joanna Newsom making this damned near impossible to categorize. But there is something sparkly and vibrant in the air here that seems to flow through the valley.

As the sun spills onto Glanusk Park, I head to the main stage just in time for Gwildor. Their mix of gentle acoustics and chamber-popesque narrative glides wonderfully over the crowd like the sunshine itself. Up next are Fanfarlo, who nearly make me drop my organic falafel in delight. With elements of the Arcade Fire and Clap Your Hands Say Yeah, they swirl and bounce like an earthquake in the map pocket of your cagoule. Over on the Folkey Dokey stage, Richard James’ tender harmonies sound like the soundtrack to a day dream whilst the Ellis Island Sound bash out their own brand of delicately beautiful Heath Robinson hoe-downs. Perhaps the find of the day, if not the weekend, are Slow Club. Consisting of a guitarist who seems to have St Vitus’ dance and a drummer who incorporates glass bottles and the back of an old chair, they make an eye-wateringly beautiful sound.

As if by wonderful design, tunes like ‘Sunday’ and ‘Apples and Pairs’
immediately kick you in the bollocks with the epiphany that everything is going to be just fine. Dead Meadow, on the other hand, just plain kick you in the bollocks. They sound like the scene from ‘Dazed and Confused’ where, just as Ben Affleck is about to knock the shit out of some high school kids, the earths moon smashes into his eight track of Led Zeppelin. It didn’t make the final cut of the film, but I’m sure it’s on the DVD. Completing the quota of ex Gorky’s members, Euros Childs doesn’t disappoint with his idiosyncratic bundle of strangeness. But it is at this point that the festival takes a slight change of direction, not for the better, but for the wetter. At one stage, I fear that the rain is going to swell and turn this valley into a lake. Thankfully that never happened, but my Adidas are well and truly ruined: yes, I was that idiot who didn’t bring wellies. Or a mac.
Or a tent that didn’t seem to be made out of crepe paper.

Saturday begins with the vague recollection of the wonderful Joanna Newsom and a severe taste of red wine in my mouth. By now it is literally pissing it down, but my tent somehow manages to be wetter on the inside than the outside. Monkey Swallows the Universe manage to warm me up slightly, with bittersweet tales that are blanketed by snug acoustic tones. In contrast, P.G. Six breathes out a delicate and fragile sound that belies his noisy Brooklyn beginnings. Slightly rustic and pastoral, his sparse songs seem to exist, just for a second, like the bones of a ghost. In the dampness, the North Sea Radio Orchestra tingle your spine, like a shiver. A massive collective, or ‘chamber group’ as they call themselves, they make a complex but highly entertaining noise that is somewhere between baroque pop and post rock. Well, winning the title of ‘most intense bassist ever’ is Adem Ilhan of Fridge. They are reminiscent of Mogwai but with the noise-tourettes of Kieran Hebdon, layered rakishly over the top. Fridge and Battle have much in common. Other than the fact that they are both brilliant, both sweat intensity and belief out of their pores and both share a depth of noise and precision that can only be described as Math rock, as performed by Dr David Banner when someone has just clamped his Sedan. You wouldn’t like Battles when they are angry.

By Sunday afternoon, I had entered a Zen-like trance. Cross legged in the middle of the camping field, I hovered one inch above the puddles of water, powered only by cous cous and local cider. Only an outfit as mighty as Misty’s Big Adventure would be able to pull me from my aquatic stupor. With all the wit of the Bonzo Dog Doo Dah Band, they are armed with more modern, Art Brut-like incisors and are the perfect remedy for a day like this. Next up are the Earlies who, somehow, are still relatively unknown. Their sound is many things: intelligent, melodic, electronic, psychedelic. Yet at their core, the Earlies are simply a brilliantly affecting pop band and should, by rights, be huge. Gruff Rhys, or the Welsh Brian Wilson as he should be known, plays many of the songs from Candylion that make it one of the albums of the year. With equal measures of humour and melody, he is made for the Green Man Festival and his set is a delight. As Steven Malkmus and the Jicks round up the weekend with their brilliantly off kilter oddness, I retire to the boot of my car for some long needed dryness.

Whilst it is generally regarded as a folk festival, this tag is a tenuous one at best. The Green Man is instilled with a sense of sheer eclecticism and energy; where else could you hear the delicately haunting instrumentation of Nancy Elizabeth alongside the epic glitch-noise of Fridge? I think the best way to describe this unique festival is to not talk about the music at all. Combining a real sense of inclusion and warmth with a unique atmosphere, Green Man is a real gem of a festival which makes no preconceptions about age or musical tastes. It does, however, require that you provide your own aqualung and goggles.

It’s amazing what the human spirit can get you through if you have six litres of red wine and a love for Welsh psychedelic pop.