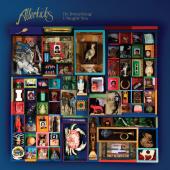 Alterkicks – Do Everything I Taught You

Alterkicks’ bring their barnstorming debut album to the nation. A drooling mix of pop tastic foot stompers with cloud reaching harmonies. The band release ‘Do Everything I Taught You’ on B-Unique records and is produced and mixed by Stephen Street.

With a tantalising mix of songs the album should see the band being propelled to dizzy heights. Some past singles also appear on the album like ‘On A Holiday’ and ‘Good Luck’ alongside ‘The Cannibal Hiking Disaster’. With the album hailing a melting pot of impressive sing-a-longs, the band have fine tuned the last 3 years of writing, playing and producing to create this tight nit belter.

After a hugely successful performance at this year’s Glastonbury festival the launch of the album will see a nationwide song and dance over the band.

Tracklisting is as follows:

Out now so buy!