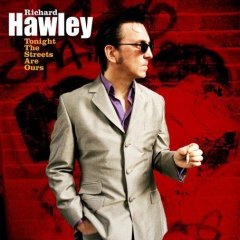 Richard Hawley – Tonight The Streets Are Ours

The first single from the album: “Tonight The Streets Are Ours” kicks off with simpering strings and shimmering harps and leave the listener waiting for Doris Day to start singing. Instead, we get the smooth stylings of Sheffield’s Richard Hawley. This warm ballad has the Fifties written all over it and fans will recognise the influence of The Smiths and perhaps the Divine Comedy.

Richard explains where his retro sound comes from: “I didn’t want to re-invent the wheel or anything “I write songs and I play guitar, that’s it. There isn’t any mystery to it. I’m just constantly in search of something beautiful, melodies that just hit. That’s kind of what I do, I find it difficult to explain because it’s so simple.”

Simple, he writes and plays beautiful music. What more do you need?