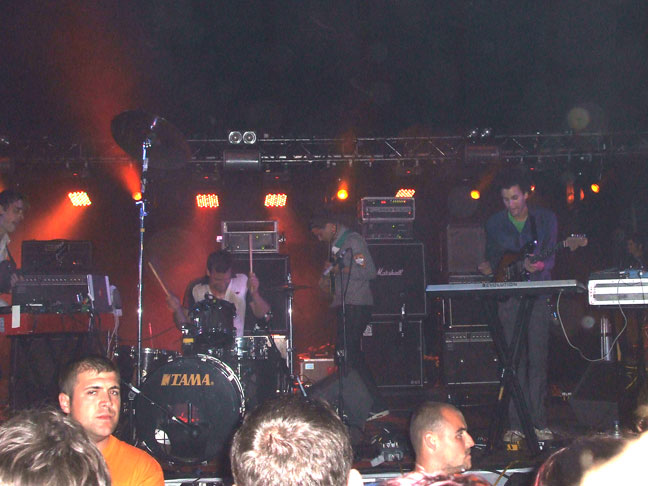 The terms prog and math rock are almost derogatory to a band that defy any conventional sense of genre in the music sphere. The NME’s new term for Battles ‘puzzle pop’ is something different; a jolly unique term that really means nothing, the band don’t seem to mind this. As a Glasswerk definition it’s 21st Century jazz. Stanier, Williams, Konopka and Braxton are your modern day Krupa, Miller, Ellington and Armstrong. Sweating profusely in the name of wild spiritual voodoo sounds just like the greats as far back as the 50’s did in that grubby underground New York scene. It’s fat man. It’s Battles.

Tonight the downstairs bar of the Barfly is packed; the lingering outdoor temperature combining with body heat has sticky results. Not as sticky, though, as the substance I put my hand in while clambering onto a drinks shelf, half to gain a better view of Kling Klang, half to inhale the sweeter, alpine air, 1 foot above the crowds’ heads. The krautrock inspired scousers Kling Klang have their energy levels rigged up to 11, fresh from a 3 year hiatus, they joined forces again in Dec 06. The perfect warm up for Battles, and that’s no offence to them because they’re great in their own right.

From my lofty height I’m able to do some local celeb spotting, I’ve not seen the Barfly this busy in a long time and at least half the crowd are part of the new ‘pool royalty: Mood Food, Metro Manila Aide, Indica Ritual, The Laze, Elle S’Appelle… all seeming to appreciate the squidgy synth, frantic drumming and strangled guitars of Kling Klang.

After noticing how quickly the crowd filtered out the room and thinking they must have all been really desperate for a ciggie, I enjoyed a good 15 minutes of conversation with a mate in a deserted room before the latent genius I always knew was there seeped back into the part of my brain known as the cerebral cortex and realized that my mate was telling me that Battles were playing in the other theatre room. Despite this minor offset, we relocate in time to see them come on stage.

Anyone new to the band would be able to guess from the set up that the drums are a focal point of the bands live performance, the kit is set up at the centre front of stage, with the crash pulled up to about 6 ft high. The set is opened with a bang and maintains the unmistakable and relentless energy throughout but the crowd really goes off when the band starts playing single Atlas from their latest album Mirrored. It’s a pumping tribal beat and combined with Tyondai Braxton’s bizarre chipmonk vocals, it’s like all the characters from The Wizard of Oz jamming after one too many acid laced pear drops…those scary flying monkeys would be hard pushed to find a better soundtrack.

Whatever you call it whatever you make of it. It’s hard not to appreciate Battles.