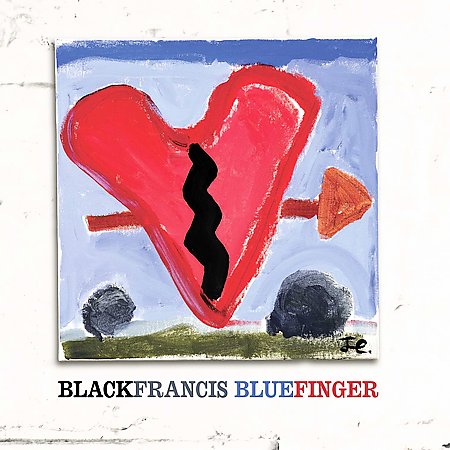 Black Francis is back with new album Bluefinger. It seems Charles Thompson has put Frank Black to bed in an attempt to reawaken some youth in the old persona. The transition came with the best of compilation Frank Black 93-03 released earlier this year.

If the music is anything to go by there is an attempt rock out a bit more with this not-so-new sound.

There are definite elements of Pixies sounded in the almost muted basslines and floating backing vocals that Kim Deal was employed to play.

Whatever Francis makes of his latest work there are only one or two tracks to stand alongside the best of his solo material back catalogue.

How many album has he made now? Fifteen in fourteen years is the answer. If nothing else Francis is prolific in his output, and constant in maintaining strong elements of Lou Reed’s influence in his unique delivery and songwriting.

Bringing in slightly more Pixies sounds with his current band. That Pixies was all about the chemistry suggests he has found some of this again.

There is still a good southern-fried wedge of country songs laced with Thompson’s drawling whine. Discotheque 36 and She Took All Her Money are prime examples of this.

Stick it on as you drive across country or stick it on the shelf and when your friends come over to talk about Grunge and Pixies you can say, “Have you heard Test Pilot Blues?” and see if they can tell it’s Black Solo Francis, post-Catholics, 2007. Twenty years on from Cactus.

Also, its worth looking into the links with dutch artist Herman Brood who songs on the album are inspired by and some of the song titles are taken from names of pieces of art. I’ll leave it with you to find which ones and just add that th connection is believed to have come from Thompson’s agent in Holland who was also the agent of Herman Brood in the seventies.