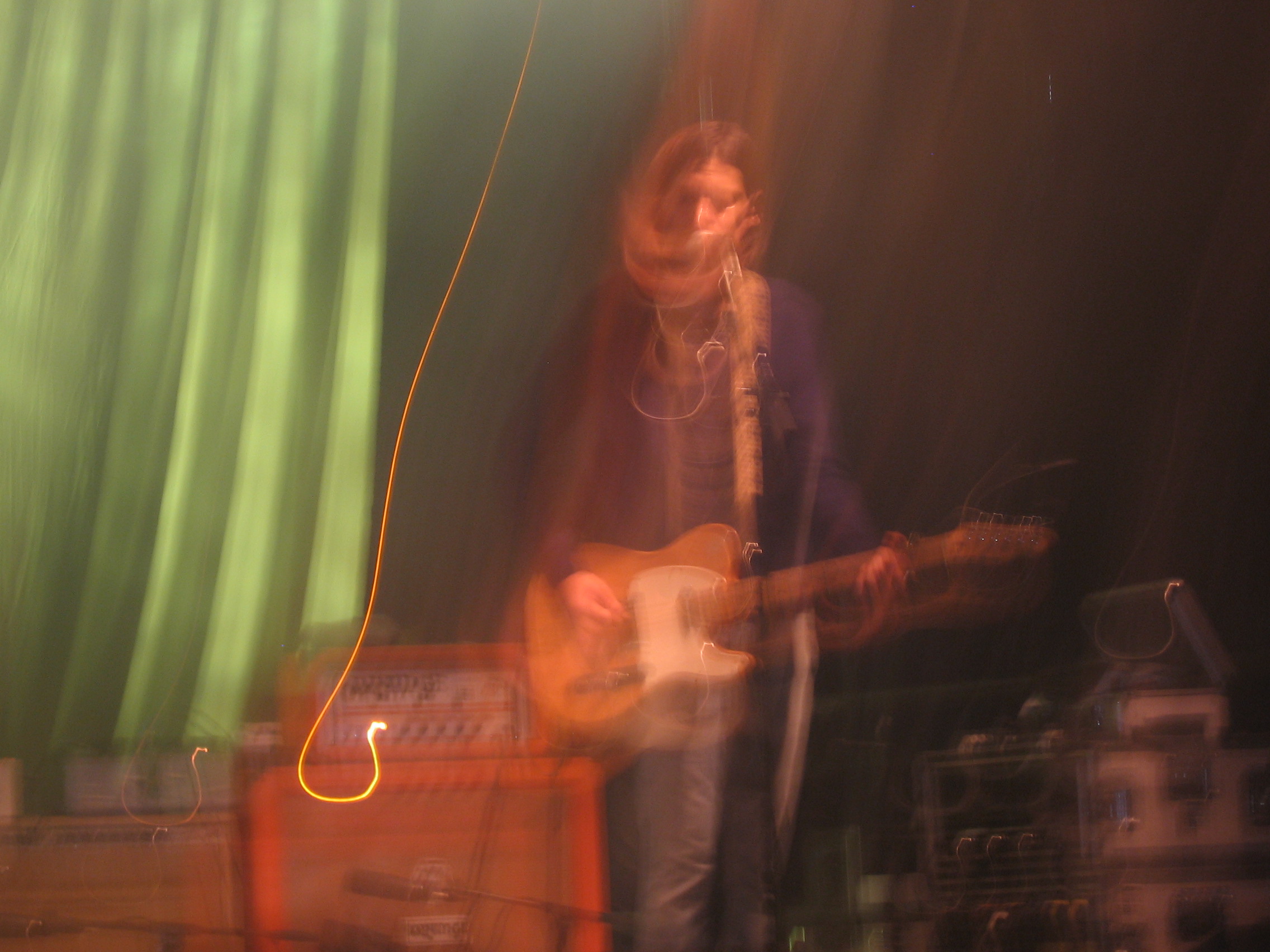 Having been driving for what feels like four lifetimes Glasswerk finally arrives at the Green Man Festival in Crickhowell. Sadly I have missed both Gwildor and the Gentle Good but as I live in a country that has what amounts to a dirt road linking the North to the South it’s hardly my fault. On entering the festival grounds you get a slight waft of hippy dippy in the air but no matter, on with the music.

Richard James – Folkey Dokey Stage – 4pm
Former Gorky’s man James recently released his superb debut album is joined on stage by a full band that includes Cate Le Bon. His forty-minute set is made up primarily from ‘The Seven Sleepers Den’ with superb renditions of ‘My Hearts on Fire’ and ‘Empty and Cold’ as James shows a stunning maturity to his live performance since going solo. Having always been seen as the quiet member of the Gorky’s it’s fantastic to see Richard flourishing in his solo career. The set is a fantastic mix of slow countrified ballads and up-tempo folk rock that has James thumping about the stage. Perhaps the most remarkable aspect of the set was the amazing silence afforded James by the audience. There must have been close to a thousand people all calmly sitting on the ground bathing in the musical brilliance of Richard James and his band.

Rachael Unthank & The Winterset – Main Stage – 4:45pm
The main stage seems very sparse at this moment filled with only a pianist, two vocalists and a violinist / accordion player. I spend the majority of the set trying to work out which one of the four women on stage is Rachael Unthank. The pianist does a great deal of talking but it seems to me that one of the vocalists is the afore mentioned Unthank. Anyhow no matter, what we had were two supremely beautiful voices giving gorgeous renditions of Wicker man style Celtic folk with some clog dancing thrown in for good measure. They manage to cover a Robert Wyatt song as well as playing an classic English folk song called ‘I Wish I Wish’ before closing with the sublime track ‘elegality’.

Arborea – the Green Man Café – 5:20pm
A folk due from Maine in the United States kick off with a couple of tracks that annoy the ears more than anything else. But just as I think it may be better to move on, things pick up and become very pleasant indeed. The set includes an environmentally themed song called ‘Bird Caught in Smog’ which is played just before they ask a member of the audience to take pictures of them for their kids.

Daimh – Folkey Dokey Stage – 6:30pm
This six piece folk collective played a gentle set of Gaelic music inspired from the Hebrides in Scotland. Featuring violins, bagpipes and guitars it makes for a moving sound-scape of an age passed and brings to mind gentles times when things were a little slower and perhaps a little bit more meaningful.

Euros Childs – Main Stage – 7pm
Now on his third solo album in just over twelve months Childs has been nothing short of prolific since dissolving his legendary band Gorky’s Zygotic Mynci. Today he played a thirteen-song set that had him playing with his band as well as a middle section featuring only him and drummer Pete Richardson. Childs performed with his usual vigour thumping his right foot to every beat, howling like a banshee like a demented James Brown. Highlights from the set includes ‘Donkey Island’, ‘Ble Mae’r Bau’ and the set closer ‘Sandalau Green’. He remains the most curiously enigmatic figure in Welsh music having what seems to be a split personality between the ultra shy person, who walks around the festival field, to the mad demented performer that thrilled the gathered crowd this evening.

Dead Meadow – Folkey Dokey Stage – 8pm (PICTURED ABOVE)
Moroccan beats fill the tent as we finally get to the meat and potatoes of the day’s music. Psyche rockers Dead Meadow have come from the US to wake up this slumbering giant of a festival with forty minutes of adrenaline fuelled, bass driven rock of the highest quality. The three-piece bang out song after song to thrill a packed tent in need of a little balls to the wall psychadelia. The band even come prepared in terms of style covering all possible bases in terms of their hair. They have a long haired bushy bearded drummer, for the folk lovers, a medium cut hairline for the young wannabe folkies and a Beatle styled lead guitarist for the die hard indie boys in the crowd. They play huge renditions of ‘Dusty Nothing’ and ‘Drifting Down Streams’ and in doing so provide the set of the day, just edging out headliners Tunng.

King Creosote – Folky Dokey Stage – 9:30pm
Kenny Anderson comes to the stage, dressed somewhat like a Russian sailor, to rapturous applause and begins with a solo song before being joined by his band. A huge star on the folk revival circuit Anderson provides sing along moments galore with tracks such as ‘Not Good Enough’, ‘All Comes Back’ and ‘You’ve No Clue Do You’ electrifying the capacity crowd rammed into the tent. Anderson should be given a knighthood for his relentless work rate and total dedication to music in all of its forms.

Tunng – Folky Dokey Stage – 11:10pm
The stage looks like an afterthought from the Club Tropicana video shoot with palm trees and a Hawaiian bar thrown in for good measure. As they arrive on stage you can tell that Tunng have big plans for their band with a fantastic look with one member in a white suit and feathered cap. I watch from just outside the back of the tent, getting a birds-eye view of a capacity crowd going absolutely nuts for folk music, albeit with a very modern slice. Tunng play hybrid pop folk that even incorporates dance beat elements that has people bopping away. The folkies dance the night away cheering for every new song as they play favourites like ‘Jennie’ and ‘Sun Revolver’ before bringing it all to a stunning climax with ‘Bullets’. Tunng are a revelation live putting on a show of true headliners, thrilling with every song holding their audience in the palm of their hands.

Joanna Newsome – Main Stage – 12:00
Newsome’s set must have started late as I catch over half of it despite having watched the headline set by Tunng. The folk harpist has drawn an impressive crowd and by the time I arrive seems to be providing a very decent night’s entertainment. Newsome posses a voice that will divide most audiences, but tonight she’s a goddess for those gathered at the main stage. Beautifully playing her harp she receives rapturous applause for each song before finally leaving the stage.

The Duplets – Green Man Café – After Hours
The harpist theme continued after hours up on the hill as the Scottish folk act The Duplets bring a stunning array of jigs and Gaelic folk tunes to those dedicated fans of live music gathered at 1am. Fraya Thomsen and Gillian Fleetwood are easy to love combining lush vocals with duelling harps and a wicked sense of humour that both gleefully impart on those gathered. They play a wondrous array of heartfelt tunes including ‘Tree of String’ and ‘Chloe’s Passion’ all of which draw warm applause from an audience that simply does not know when to stop needing live music. Both girls seem charmed by the cheering crowd and certain males in the crowd seem more than charmed by the girls. Scotland seems to have an abundance of musical talent at this festival and The Duplets shine as much as any other on the bill.