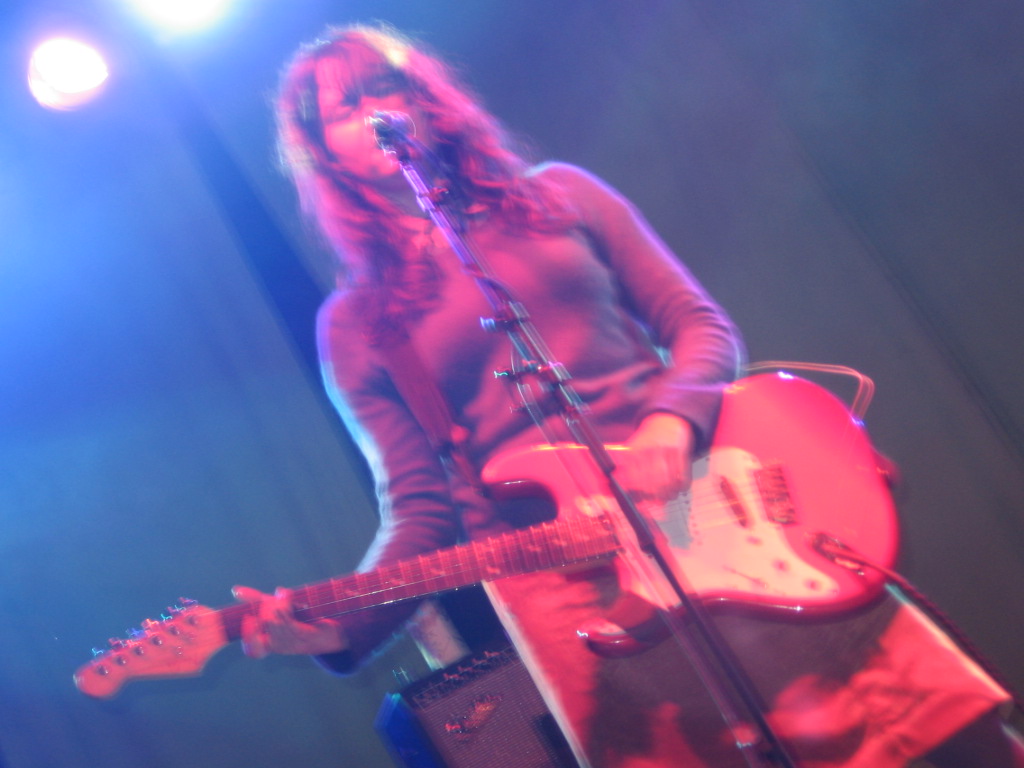 Yes the rain has arrived with some abundance to say the least. As I walk onto the main site and pass the Folkey Dokey stage I’m confronted with the sight of an almost packed out tent of people sheltering from the rain. The bands who are scheduled to play the tent are in for a captive audience for the vast majority of the day by the looks of the slate grey sky. Something else that is as astounding as the amount of people in the tent is the queue of people waiting for Pie and mash at the Pie Minister stall, must be at least 20 deep and would stay that way for the rest of the day, rain and mud not withstanding.

Alun Tan Lan – Green Man Café – 12:15pm
North Wales song-smith Alun Tan Lan has recently been given glowing reviews for his work by non other than Gruff Rhys. Alun is also part of Euros Childs band and is joined for several tracks by Childs’ drummer Pete Richardson before Euros himself comes to the stage for one track. On arriving on stage Alun introduces Euros to the audience by telling them that he’s staying in an expensive hotel for the festival. Alun plays a stunning array of Welsh folk rock songs playing gorgeous versions of new tracks ‘Angel’, ‘Haf’ and ‘Cynafal’ to a surprisingly large crowd given that it’s 12:15 and pissing down with rain.

Christopher Reed – Green Man Café – 2:15pm
Christopher is one of Wales’ finest singer songwriters who’s work has a unique intensity that plays on Reed’s slightly darker side. Chris has recently finished his third album with ‘Cautionary Tales’ set for release in a couple of weeks. His set is mostly made up of tracks from the new album such as ‘Bucket Full of Holes’, ‘Sinner Serenade’ and the gorgeous set closer ‘How Did you Sleep last Night’. At one point he calls out for Victoria Williams to come and sing with him one of the tracks they collaborated on for the new album but she’s nowhere to be found. Then just as he’s closing up she appears and closes the set with him on a lovely version of ‘How Did you Sleep Last Night’.

Voice of the Seven Woods – Folkey Dokey Stage – 4pm
From the start their seems to be technical issues for the band, with their front-man getting more pissed off as the set went on. Their music is a full on instrumental folk dance sound that comes together wonderfully when they are less caught up in the possible problems with the sound. The closing track is an epic world of sound that reaches for the sky and more than easily reaches the moon. On concluding the last song the band walk off, seemingly still annoyed with what went down during their stage time.

Clinic – Main Stage – 4:30pm
Liverpool based indie rockers clinic appear on stage in the usual OR scrubs, brown this time, masks for some reason have decided to include top hats? They play a highly improbable 11 song set in just 30 minutes, each song coming and going with amazing urgency as they just rattle them off one after another. Clinic seem to have an amazing talent for making every song sound exactly the same without it being any kind of problem, playing tracks like ‘Fortune Teller’ and ‘The Witch’ before closing with ‘Family’. Clinic have always been one hundred percent committed to independent music and they continue to be thrilling both in terms of their output and their superb live sets.

North Sea Orchestra – Folkey Doky Stage – 5pm
Instrumental collective North Sea Orchestra play spellbinding minimalist folk that seems almost too quite even for the green man. They have an array of different vocalists and play to a packed seated audience sheltering from the rain that seems now to be never-ending.

Broken Family Band – Main Stage – 5:30pm
The one thing that the Broken Family Band want the entire audience at this year’s festival to know is that Monmouth is a total shit-hole, they seem very committed to this view. That being said they play a fine spiky set of indie rock that is perfectly matched to the sty lings of Clinic that came before. This working out of the line-up is becoming far more apparent as the day goes on as the organisers have undoubtedly put together a line-up of bands that even complement each other as they go on. The rain keeps lashing down but the crowd never thins as people stand and appreciate a talented bunch of lads delivery some proper attitude driven music.

Six Organs of Admittance – Folkey Dokey Stage – 6:30pm (PICTURED ABOVE)
There comes a moment during each festival when you come across something that you know absolutely nothing about which leaves you completely speechless. Ben Chasny appears on stage and proceeds to play feedback filled sounds that seem somewhat tame and ponderous. This though does not last and very quickly things begin to pick up as the sound becomes thicker, more driven and without doubt begins to take on a life of its own so meaningful that it’s almost impossible to describe exactly what I mean. Ben is joined by Lisa from the Magic Markers and this is when the situation slips from 4 gear up to 11 and then on and on and on to a nirvana of sound. Lisa doesn’t so much play the guitar more than totally and utterly destroys it in the most fantastic way imaginable. The only track title I catch is 1000 Birds but what the audience is given is a swirling mix of feedback and full on guitar emotion that I have barely seen ever before, at one moment it even turns into folk duelling guitars a la deliverance, stunning.