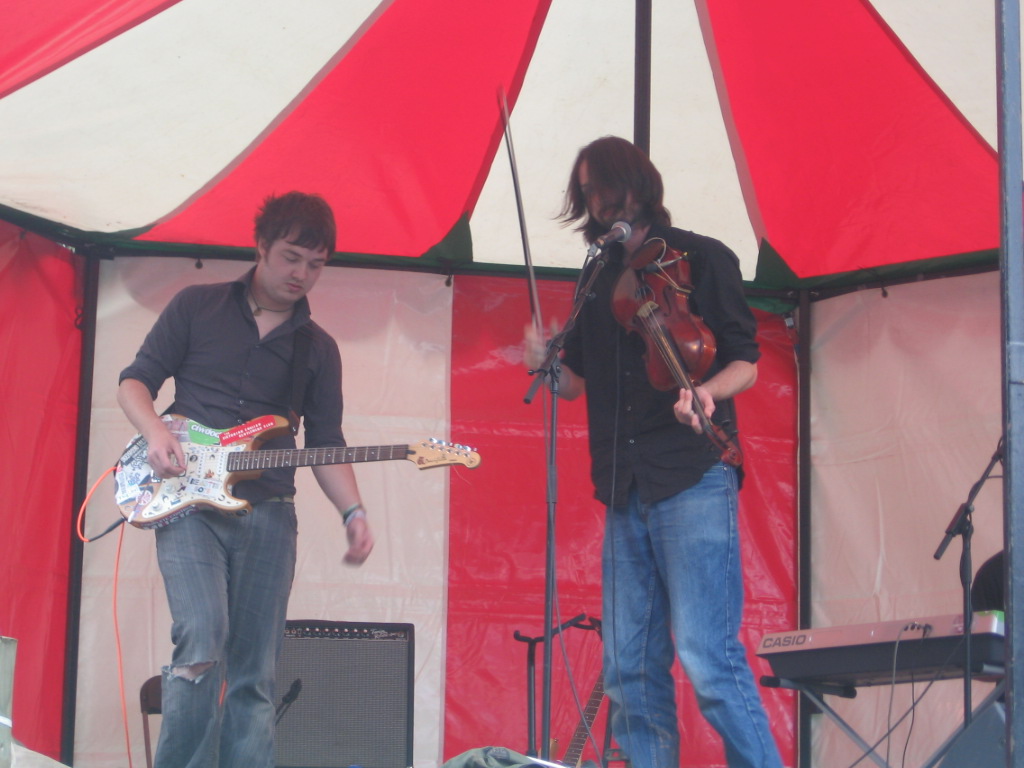 The rain still persists somewhat and people are getting their vans off the campsite on to higher ground. This annoyingly is ploughing up the field and causing my much worry with my less than powerful VW camper. People are pushing cars through the mud and it’s hard to see how things are going to get better. So off we go back to the main site in the hope that things will have improved in a few hours.

Petra Phillipson – Green Man Café – 1:15pm
Petra Phillipson seems somewhat peeved on this slightly wet Welsh morning. She plays a delicate set of guitar driven folk that includes renditions of ‘Not for the Father’, ‘Independent Women’ and the ballad of loneliness ‘Only Jack’. Her presence is one of slight nervousness and a slight feeling of being somewhat uncomfortable in terms of her performance. Petra posses an interesting voice and quite a picky nature that is mostly aimed at men being pieces of shit, at least for her, but on the whole this is heavy stuff to say the least.

Threatmantics – Green Man Café – 2:15pm (PICTURED ABOVE)
Perhaps Wales’ most exciting band of the moment comes to the stage somewhat concerned about numerous technical issues. They kick off by simply saying ‘we are Metallica’ which as silly as it sounds is not that unrealistic as Threatmantics have an element of heavy rock that is quite fantastic. Opening with the superb track ‘Sali Mali’ it’s hard to describe the sound this lot make. They are made up of a drummer, lead guitarist and violin and manage to make a racket that could see them described as being capable of anything. A few technical headaches lead to a somewhat fractured set but once this lot get going there really is little better on the grounds of the festival at any point over the past 2 days. They also find time to play recent single ‘Get Out of Time’ which brings me to the conclusion that this is Wales’ best young band by far.

Malcolm Middleton – Main Stage – 4pm
Former Arab Strap man Malcolm Middleton has now gone solo with upbeat folk being his poison of choice. He runs through an effortless set playing ‘Fight Like the Night’, ‘Die Alone’ and new track ‘Blue Plastic Bags’ to a sizeable audience gathered in front of the main stage. The priceless moment of the set comes near the end when Middleton tells the audience that he had been working on a cover of ‘Whole Lotta Lead’, but that some cunt had already done it the night before.

Cate Le Bon – Green Man Café – 5:15pm
The royalty of Welsh music gather for the set by soloist Le Bon with faces such as Richard James, Euros Childs, Threatmantics, Lisa Jen, Huw Evans and Gruff Rhys in attendance. Le Bon has one of the most beautiful voices to be found in the land of song but seems a little jaded today after 3 days of non-stop festival high jinks. Playing as part of a three-piece band she plays gorgeous renditions of ‘No One can Let Me Down’ and ‘Hard Time to Fall in Love’. She even has time to forget a song in its entirety before calling some of the faces named above to play the set closer ‘Y Tocyn’ that proves to be the highlight of a somewhat lack lustre set.