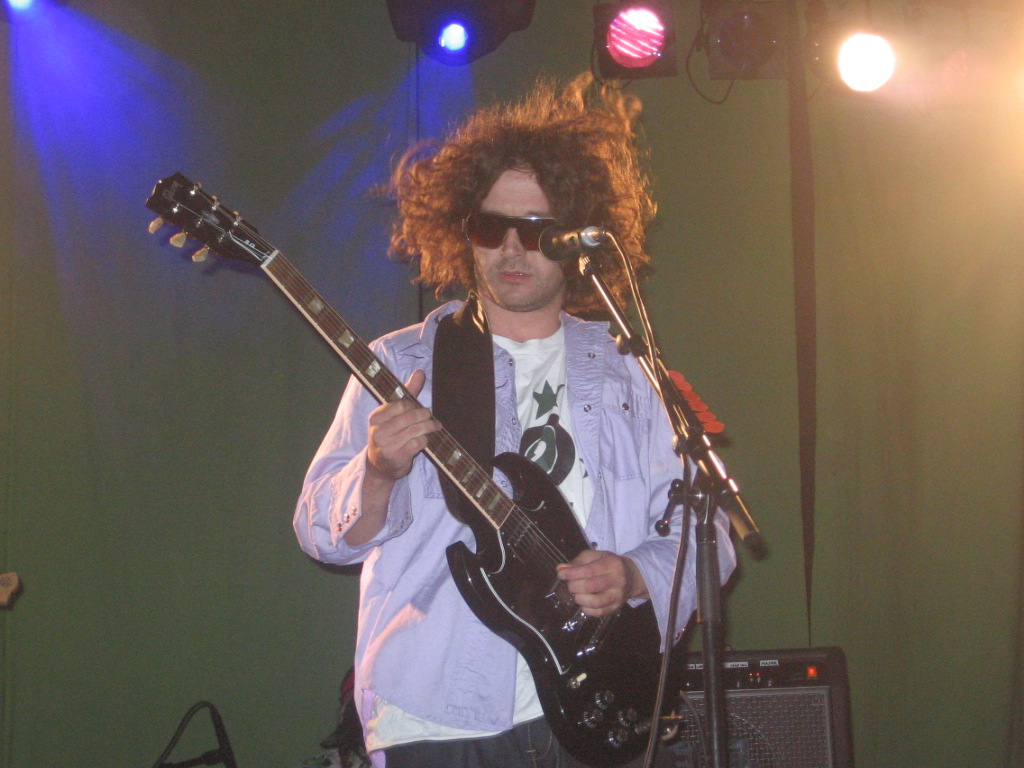 Unbelievably I have managed to get my camper off the site without getting stuck in the mud. How this was achieved is truly a mystery to say the least but thankfully it is done. The sight has now become a quagmire of mud but things just go on regardless. With only a few hours to go its onwards and upwards with the music.

The Earlies – Main Stage – 6:15pm
From the deep south of the USA, The Earlies are a huge musical ensemble who have so much talent it’s most probably hard for them to work out what to do with it all. Their output has been nothing sort of superb and their live sets are equally as sublime. They run through a forty five minute set that includes ‘Back Again’, ‘Stay with me for a While’ and ‘Is their No Love in Your Heart’. The band are made up of god knows how many people exactly with instruments that range from keys to guitars to a huge tuba hidden at the back of the stage. Supreme music from a band that will never find soul destroying popularity, thank god about that.

Gruff Rhys – Main Stage – 7:30pm
The king of the current Welsh music scene comes to the stage, which has been transformed into a huge television set, with co-singer Lisa Jen from 9Bach. Having seen Rhys during his tour back in March I find this performance to be a refreshing improvement as the set seems far tighter and considered with superb renditions of ‘Cycle of Violence’ and ‘Lonesome Words’. There is though one problem for Gruff and any festival set he will do that is not over forty minutes long. This problem comes in the shape of set closer ‘Skylon’ which at the epic length of over 20 minutes takes up over half the set so you have the feeling that it’s all over before it actually got going. That being said it’s a fantastic performance with Gruff in his usual light hearted mood that warms the audients to him straight away. ‘Skylon’ is an epic song performed with much aplomb by all concerned.

Seasick Steve – Folkey Dokey Stage – 8pm
Former hobo and three string guitar genius Seasick Steve is thrilling a packed tent when I arrive minutes into his much anticipated set. He sits alone on the stage surrounded by different guitars and has a repertoire of sounds and patter that has come with years and years of plucking combined with living a unique life to say the least. He plays a track that deals with ‘chiggers’ which is apparently something you find in the South before introducing a tramp boogie entitled ‘Dog House Rock’. But he himself sums up his music by telling the audience of a time when somebody told him not to play slow to demonstrate his craft as he should behave like a serious bluesman, to which Steve replield ‘fuck that shit, I’m a song and dance man’, exactly.

Devendra Banhart – Main Stge – 9pm
The undoubted pop star of the new folk movement brings himself, his hair and his even hairier band to the main stage in Crickhowell. Just watching Banhart leaves you in no doubt of his talent or his self-knowing persona that is somewhat annoying. But the splendid set is destroyed by one moment of utter madness that is so without merit that even now it pisses me off. Half way through the set Banhart tells the audience that they can all grow their hair and write a song, before asking if anybody wrote a song that day. The upshot is that by pure chance there is a girl in the front row that has done just that, she is hoisted out of the crowd, given a guitar and left with the whole stage to perform her ditty. Unsurprisingly she performs with some aplomb before giving out her myspace as it turns out she is a musician of some talent. Why exactly barnhadrt would think this kind of crap would fly is beyond me. It’s not her performance but the notion of his spontaneity that was grating beyond words. If you want to introduce new talent just do it, don’t make out it just happened, pathetic.

The Aliens – Folkey Dokey Stage – 11pm (PICTURED ABOVE)
The last band on the last night and like the vast majority of the programming the organisers have kept the ultimate party band until the last of the last. Made up of former members of The Beta Band, the Aliens combine dance beats with straight up rock and roll that is the perfect closer for such a superb event. The capacity crowd party the final hour away with a combination of glow sticks, bubbles and even a little poggoing to the utter delight of those on stage. The culmination of the night comes with stunning renditions of comic delight Robot man and the final song to beat all final songs, ‘The Happy Song’, which asks the question, do you want to be happy? Such a simple answer can be given at this very moment.

As I leave I walk across the abandoned main stage area and walk out of the festival sight, back to my VW Camper and head for home. Their can be little doubt of one thing The Green Man has to be the friendliest festival in the UK calendar and the music isn’t half bad to boot.