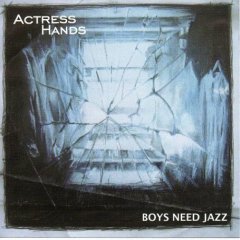 In the minds of some dodgy people, Actress Hands (AH) sound like a Richard Fairbrass lead Pavement! Surely that’s something even a great sense of humour can’t even compensate for! That said, Electric Soft Parades Alex White contributed his vocal, guitar, percussion, production, recording and mixing skills to the project. I know they shared a split 7” single but come on! So what is it that Brighton’s Matt Eaton (vocals / guitar), Phil Summer (keyboards / cornet / trumpet / vocals) and Johnny Lamb (Drums / guitar / vocals) bring to their own debut LP Boys Need Jazz?
Matt recorded six solo tracks which he then wanted to play live and so, AH was born. And so Boys Need Jazz was born too. Within, there’s a predominant Teenage Fanclub sensibility to the music that touches upon Gorky’s Zygotic Mynci, Doves, Feeder and The Dylans. There’s one unavoidable constant throughout the LP and that, sadly, is a lacklustre lead vocal that’s only reinforced by an accompanying, predictable backing vocal. Some intricate keyboard work serves well to break up the weariness induced by the vocals, as do the clever gear shifts and abrupt song finales. The songs themselves are composed well. The highlight amidst these great but ultimately doomed songs is ‘Snack Horse’. Its ‘Hey Mickey’ drum intro leads us into a lounge version of Radioheads ‘Blow Out’. But that’s about it I’m afraid. It’s an LP full of inoffensive tracks that fail to inspire and negate themselves by the LPs close.
With some dimension adding imagination brought into their sound, AH will surely produce a superb LP in the future. Let’s hope they don’t leave it too long.