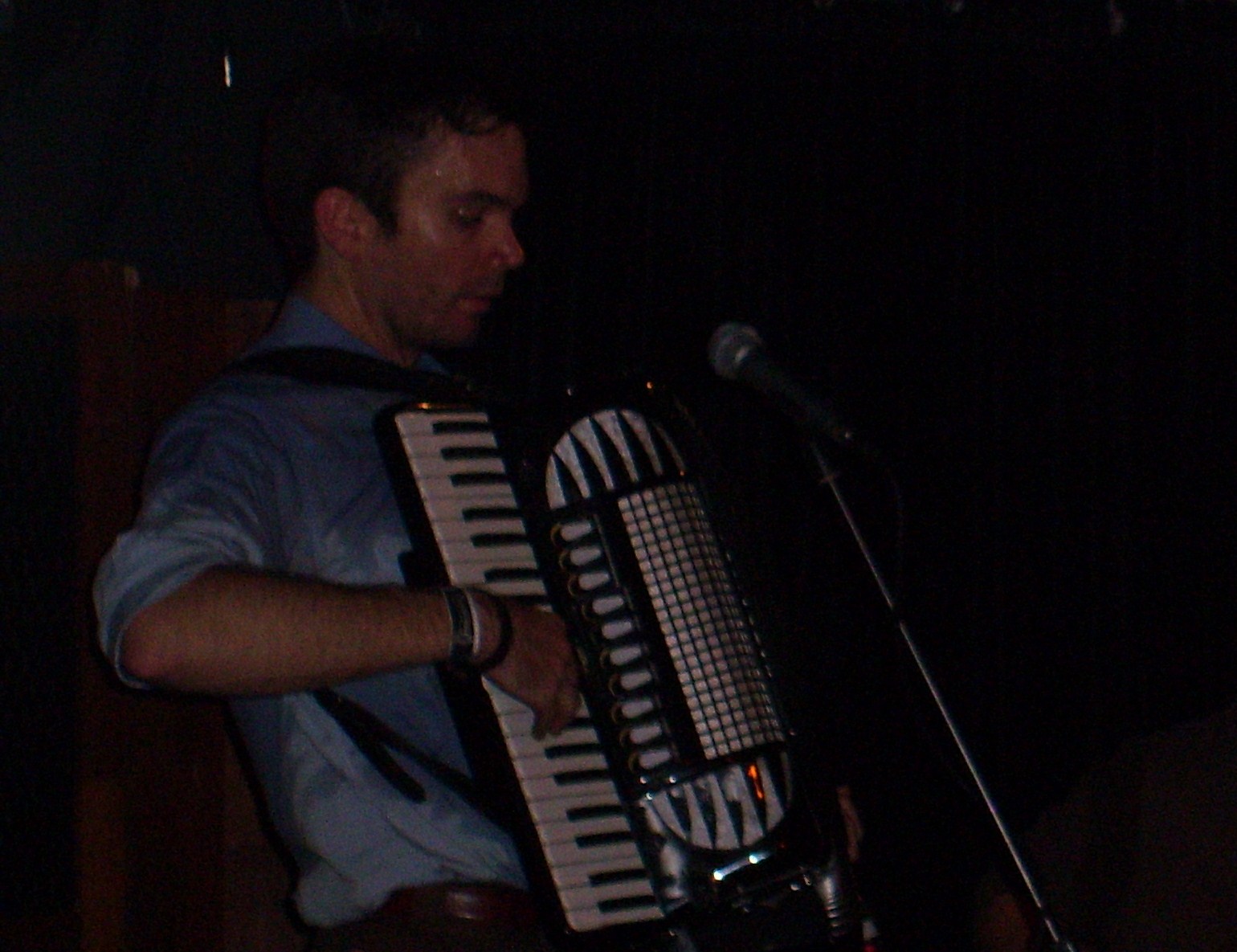 A HAWK AND A HACKSAW – The Luminaire, Kilburn, London

Alongside photogenic violinist Heather Trost, Jeremy Barnes performs these days under the name of A Hawk And A Hacksaw. Their Eastern European and Balkan folk has won them a small yet dedicated following, and three critically acclaimed albums down the line, AHAAH seem to be at the peak of their game.

The accordion is a bizarre musical instrument. Anyone who, like me, has spent any meaningful amount of time in Paris probably considers the accordion to be the most pointless and irritating of all musical instruments. There’s nothing worse than having your Metro journey back from work to your “maison” ruined by a cheese-eating surrender monkey with the French equivalent of the bagpipes draped around his neck. But my hostility towards the accordion dissolved at the Luminaire this past Wednesday evening. Barnes, formerly the drummer in Neutral Milk Hotel (and also formerly employed as a postman in Leicester) has found a way to play the accordion that doesn’t make me want to stand up and scream “merde” at the top of my voice.

Now this particular Glasswerk reviewer does not have a schooling in the technical aspects of music. In other words, don’t ask me what other instruments were involved! Barnes combines his accordion playing with some kind of bass drum/percussion role. Trost plays what looks like a violin with a horn attached to it. And for this show at Kilburn’s Luminaire (Time Out’s ‘Live Venue Of The Year), they are joined by Unger Balázs. Who is, apparently, a “cimbalom” maestro. I can only assume that the cimbalom is the table-shaped, partly-stringed xylophone that Balázs sat behind, and not a description of his goatee beard.

AHAAH’s music is a beautiful melding of styles. Taking inspiration from folk, gypsy, klezmer and mariachi bands, they produce unconventional, experimental tunes, mostly instrumental but occasionally accompanied by unintelligible vocals. Their most recent album, ‘The Way The Wind Blows’ (which was released in October 2006) was recorded in a remote Romanian village, and it provides the core of the show. ‘Song For Joseph’ and ‘God Bless The Ottoman Empire’ both get airings, and these would be good starting points for newcomers to AHAAH’s music. Rather than the traditional approach of leaving the stage before returning for an encore, Barnes and Trost merelysit to the side, allowing Balázs to perform a breathtaking cimbalom solo. The ‘encore’ track is performed with Barnes roaming amongst the audience with his accordion, whilst Trost perches herself on the front of the stage, providing the occasional virtuoso stringed accompaniment. It’s no ordinary show, but then AHAAH are clearly no ordinary band. It’s this reviewer’s strong belief that if you readers have not yet heard any AHAAH material, you really ought to go check them out post haste.

Earlier in the evening, fans were treated to two starkly contrasting sets from the support acts. Glaswegian two-piece Directing Hand give this reviewer a headache. Alex Neilson’s improvised drumming has no rhythm (although I’m sure that’s the purpose – if not, then it was really a dreadful performance). Vinnie Blackwell’s “vocals” consist partly of cantorial or choral singing, partly of screaming, and mostly of droning. There are no lyrics. If you don’t have anything to say, don’t groan and wail and scream! The only portion of the set that came anywhere close to approaching traditional music is when Blackwell plucks a harp, but even that has no real structure. It just sounds like a load of noise, and not a very pleasant noise at that. Still, those members of the audience that aren’t clutching their heads in agony seem to enjoy the set.

The same criticisms cannot be levelled at the first act on stage. Gentle giant, Benjamin Wetherill plays the most fragile, “wouldn’t hurt a fly” music, but melds it expertly with bleak storytelling. The Leeds-based singer-songwriter enraptures the audience, many of whom sit cross legged on the floor. The scene seems oddly reminiscent of “storytime” at kindergarten. The crowd are transfixed… you can literally hear a pin drop. Late arrivals tiptoe across the wooden floor so as not to disturb the scene… even the bar staff seem aware that they should not ruin the atmosphere, and take extra care to close the cash register quietly. Wetherill finds time to pull out a ukulele, for a cover of George Formby’s ‘Noughts & Crosses’, and he finishes with another cover, the 1930s music hall favourite ‘Nobody Loves A Fairy When She’s Forty’. It’s a stunningly simple set from a man destined for much bigger and better things.