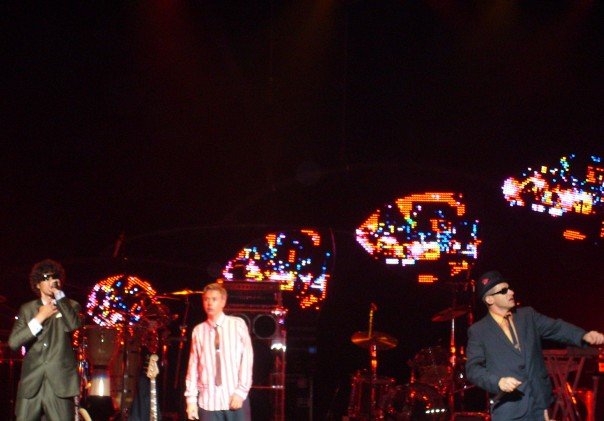 Over two decades ago, three nice Jewish boys from New York came to the UK
for their first ever gig in this country, at the Brixton Academy, as part of
the ‘Raising Hell’ tour, alongside Run DMC and LL Cool J amongst others. A
year later, they were back at Brixton, supporting Public Enemy. It seems
likely that only three people can claim to have been present in Brixton on
both those nights, and then again in early September 2007. And those three
people are, of course, Michael “Mike D” Diamond, Adam “MCA” Yauch and Adam
“Ad-Rock” Horovitz, aka The Beastie Boys.

Seven acclaimed albums and two decades down the line, the Beasties are not only still going strong, but apparently as popular as ever, judging from the three sell-out crowds that are greeting them on this jaunt to London Town. There’s always a sense of anticipation at any gig from a legendary performer, and the Brixton Academy was buzzing long before New York’s favourite sons stepped out onto the stage. They may be well into middle age (all three are now in their mid-40s), but fans still clamour to see their hell-raising antics, even if those antics now have a grey-haired tint.

The setlist itself is largely inconsequential. It featured an intriguing mix spanning their entire careers, and was billed as a ‘Greatest Hits’ show. But the irony is that those 20-plus years in the business have brought only two UK top-10 hits (and one of those is the lesser known ‘Ch-Check It Out’). Yet there are no problems with any lack of familiarity. It could be said that if you’ve heard one Beastie Boys song, you’ve heard them all. And that seems to hold true in one sense… even songs with which the crowd are largely unfamiliar go down a treat. And yet every rhyme sounds as fresh as original as the day it was first recorded.

Mix-Master Mike demonstrated his sensational skills on the decks, situated above a riser that spelt out his initials – MMM. Impeccably dressed as ever, the Beastie Boys and their backing band wore their now-trademark suit and sunglass combinations. ‘Root Down’ was an early set highlight, followed by a magnificent ‘Super Disco Breakin’ and ‘Sure Shot’. The Beasties flow from one song to the next effortlessly, bounding around the stage with youthful vigour that belies their years. The most recent instrumental album, ‘The Mix-Up’ provides a handful of tracks, including a stunning ‘The Gala Event’, accompanied by glitter ball lighting that sounds oddly reminiscent of ‘Amnesiac’-era Radiohead. A riotous ‘Tough Guy’ is immediately followed by ‘Brass Monkey’ and the crowd bounce joyously. ‘Skills To Pay The Bills’
demonstrates that oft-copied yet unique vocal dexterity. ‘Time To Get Ill’ is one of the oldest songs to feature, and is preceeded by a word of praise for the fans that have overcome the tube strike to adventure down to south London. Mike D even goes as far as to suggest that some fans had arrived on tandem bicycle.

The set closes out with some of their more recent offerings… the aformentioned ‘Ch-Check It Out’ from ‘To The 5 Boroughs’, followed by ‘Hello Nasty’ favourites, ‘Body Movin’ and ‘3 MCs And One DJ’. ‘So What’cha Want’ receives a rapturous reception, and before the crowd even realise it, they’re gone. The noise is immense though, and it’s only a short wait before MMM returns, for a bit of solo mixing action. And then MCA, Ad-Rock, Mike D reappear, and it’s ‘Intergalactic’ (their highest-charting UK hit), ‘Heart Attack Man’, and a storming, roof-lifting, floor-quaking ‘Sabotage’ for the predictable yet masterful finish. It’s all over so quickly, and yet the set lasted nearly two hours and featured over thirty tracks. No short-change from these professional entertainers.

They may be getting old, but there’s no doubt that when it comes to good old-fashioned rap parties, there’s none come close to those Beastie Boys.