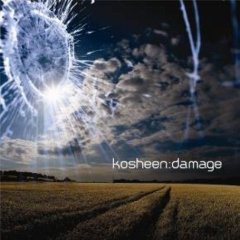 Relationships have always been at the core of music, the ability to recant a lesson learned or situation has been a powerful muse for every musician. It’s a fine line however, as Roberta Flack told us in “Killing me softly” sometimes other peoples problems can really drain you.

Sian has the ability to remove herself from a situation and dissect it with an honest and unflinching eye, songs like ‘Cruel heart’ covering new avenues and issues for both her and the band but for every success Kosheen have however ‘Damage’ is tainted with problems.

A promising opener ‘Damage’ is awash with street laboratory sounds that reverberate throughout the album, the song it’s self is interesting & inventive- softly & carefully executed; electronica and effects judiciously placed around the mix-more Massive attack, than and actual massive attack.

Moments that serve as crossroads throughout the record send it down roads that simply lead nowhere however-‘Guilt’s eighties slant doesn’t work and comes off irritating, the electronic effects on ‘Wish you were here’ feel tacked on, disturbing and holding back what could have been a very striking & moving piece.

‘Like a book’ has the feel of when Madonna tries to become relevant to another generation by adopting dance grooves-and fails and ‘Changes’ is akin to someone covering Annie Lennox and coming off worse.

Eventually the album trails off, disinterested in the stories it’s telling-the transitions between songs become like the moments before you fall asleep- unfocused and removed, which means you also potentially miss some of the better moments that are indeed present.

Ultimately ‘Damage’ commits one of the worst sins of all: it draws you in and then fails to engage you.