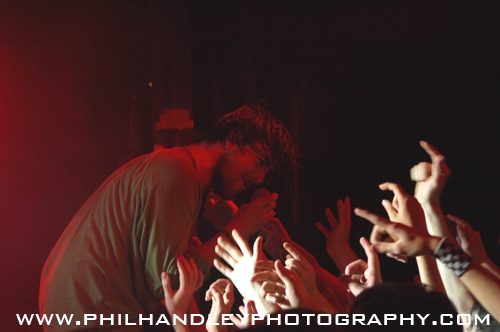 Manchester Academy 3 is the city’s best kept secret, and everyone who lives there knows it is the best of the Academy venues in which to see a band. However, the magic only really happens when you have a great band with a large crowd, and everyone in the room has to be totally up for it.

The fact that the room is a quarter empty, then, goes some way to explaining why tonight’s first support, Science Vs Romance, are a bit shit. Though I wander in only at the end, their music, while not being bad, isn’t really anything in particular, and the smattering of people who’ve bothered to show up for them treat the scene with suitable disdain. Yet as the old saying goes, ‘no pain, no gain’, and the pain of the openers is quickly quelled by the unexpected gain of Glaswegian foursome, Twin Atlantic.

Despite the shit name, these guys have attitude, talent, and innovative ideas. Describing one song as being about ‘walking into a service station and asking for an Irn Bru but being given a packet of grapes instead’, they master that charming, mild eccentricity that so many good Scottish bands have, without coming across as being quirky just for the sake of it. With the strongest Scottish accent I’ve ever heard in a singing voice, the frontman responds with confidence and wit to pissed up hecklers, and compliments the ever-changing dynamic of the music by adapting his style constantly. The music itself is slightly unrefined, as the band move out of time in places (though they themselves notice it and laugh), but they seem comfortable playing together, and deserve some respect at least for having the guitarist change to a cello for one song – which, incidentally, he is damn good at. Their best songs are without a doubt ‘Wonder Sleeps Here’ and ‘Time is the Enemy’, but with a few more years to discover their individuality and hone their skills, they might be a hot ticket.

By the time the lights dim for Circa Survive the room has filled up considerably, and the fireworks are starting to ignite. Opening with ‘Living Together’, it’s clear that the band are thrilled to be here and to find themselves in front of such an adoring audience, and the feeling is definitely mutual. In fact, there is such love and respect between the two groups that there are barely any boundaries, with singer (and ex-Saosin frontman) Anthony Green offering himself up to his disciples with astonishing generosity. When he’s not dancing like he’s being simultaneously electrocuted and sedated, completely lost in the moment, he’s planted firmly at the very front of the stage, either singing directly to the fans or buried knee deep in them. During all this, the band behind the man do their job by keeping everything going flawlessly, whilst acknowledging that Green is the king of performance by letting him do all the schmoozing. You barely notice them, partly because they play so well you don’t need to, but mostly because you cannot take your eyes off their leader. Apart from his beautiful appreciation of the fans, he uses his voice brilliantly, pressing the mic to his throat during parts of ‘The Great Golden Baby’ to allow the notes to resonate through his skin and vocal chords. Yet it really is his attitude that forces you to love him – and the rest of the band, for that matter. The crowd are encouraged to participate with inside jokes and chat, even being allowed to do their best American impressions at one point, and this creates such an amazing atmosphere that the already great show takes on even more poignancy. Green seems genuinely humbled by the nucleus of devotees at the front and the quieter followers spread around them, and to illustrate this spends at least half the gig holding hands with members of the audience – something I’ve honestly never seen at a gig before, which seems such a starkly honest gesture in that particular situation that it takes your breath away a little.

Giving everything they have, including old favourites as well as newer gems such as ‘The Difference Between Medicine and Poison Is In The Dose’ the band play til they’re almost melting in the heat, then depart to rapturous cheers. Walking in A3 tonight as a fairly ambivalent listener and leaving as a definite fan, I find it difficult to not get carried away in description, but one thing is for sure: objectively, Circa Survive are engaging, exciting, and tonight has been a magical night.