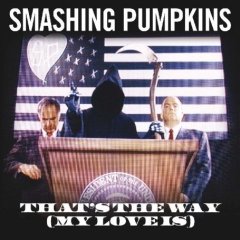 The Smashing Pumpkins – That’s the Way (My Love Is)

Another huge giant leap in the wrong direction from the Smashing Pumpkins, this new song from the new album Zeitgeist is a huge example to any reformed group how not to do it. They must believe that people love them so much that they can release any old song and people will lap it up: I think they are in for a shock. This is a real piece of retro late nineties tripe and is a mere speck compared to how great this band used to be.

The song sounds like Wheatus and The Deftones jamming together in a dustbin, horribly formulaic and tired. Without the Smashing Pumpkins a lot of great bands wouldn’t exist and they do deserve a great deal of respect but this new material is a huge let down, please get a copy of Mellon Collie and the Infinite Sadness and don’t touch this turd burger of a track with a sixty mile barge pole.