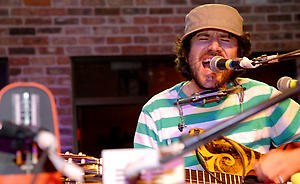 Hiro Ballroom in New York does remind you of a bad night out in Vegas with its astoundingly tacky Japanese themed look. Tonight New York get a live set from Gruff ‘SFA’ Rhys accompanied by Nine Bach singer Lisa Jen. Since the demise of James Brown last Christmas it’s arguable his mantel of the hardest working man in show-business has been taken up by Rhys with what can only be described as an endless work schedule that includes solo and collaborative work as well as his day job fronting the Super Furries. An excellent crowd at the venue, coupled with sold out show scheduled for tomorrow night in Brooklyn goes to show the growing reputation of Gruff Rhys and rightly so.

Kicking off with a cover of Mike Stevens ‘Y Brawd Houdini’ it’s a fascinating start to a widely eclectic show from the two-some. Sadly for the US audience the huge television set and all the paraphernalia they had wonderfully built into the UK live show have not made it over. But your still left with Rhys’ amazingly disarming stage charm coupled with Lisa Jen’s angelic vocal stylings, so it’s not as if your on a loser here. The show is filled with musical instruments that seemed to have come from a car boot sale as both construct songs from ‘Candylion’, with knock out renditions of ‘Gyrru, Gyrru Gyrru’ and ‘Lonesome Words’. Mid-point in the show brings a short solo set from Gruff with the always-spellbinding live version of ‘Gwm Mi Wn’ going down a treat. Tonight it’s done in a slight dance style with the audience transfixed as he seems to take a slight nap toward the end of the song which is by then performing itself. After Lisa comes back to the stage she performs one of Nine Bach’s folk songs wok has the men standing around me weak at the knees before all is brought to a loud and shouting conclusion with a ‘Cycle of Violence’.

The encore features another epic rendition of ‘Skylon’ before Jim Fairchild from support act ‘All Smiles’ comes to the stage, MacBook in hand, for a rendition of Kevin Ayres ‘Religious Experience’ which has Gruff announcing before commencing that he sadly cannot guarantee anything. The crowd clap joyfully as all three leave the stage and those gathered seem more than satisfies with the evening event. Given his work ethic you cannot deny any success that comes Gruff Rhys’ way but his ability to make even the most jaded New Yorker to relax and laugh is something to behold.