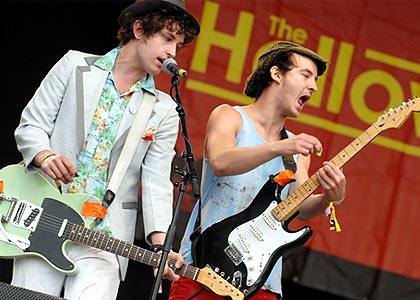 The Holloways – The Junction, Cambridge

The Holloways came to Cambridge for the first time tonight and played a triumphant set to a sold out Junction – the venue to play in the city. Their ska anthems went down a storm with the teen boppers in a huge mosh pit, extending the summer for a few thousand fans, “you’re definitely the best crowd so far…but there’s a long way to go yet!” Front man Alfie Jackson cracked to gee them up further, before cranking another London to Kingston sunbeam number out into the masses.

This wasn’t a classic though. If you like feel good tunes without worry for lyrics of any meaning then this was a right lot of fun but this has happened before and it has been done a hell of a lot better. The Holloways were introduced by a few of The Specials songs and the kids just don’t get it. The NME has done a good job of washing these young brains to see bands as poor as the Holloways’ support – The Wombats – as something to aspire to. Where has the taste gone?

The Wombats are the worst kind of animal. They are a horrible mix of sub-Green Day teen punk; happy sappy mind numbingly poor lyrics and music. There’s little else to say other than these lads don’t deserve a minute of your time. Being at this gig made you feel a hundred years old, a cynical observer and yet the youth should be inspired to worship something more than this, the Wombats are a school band at best. They make the Holloways look like some beast of a band. A quick example of the lyrical non-genius of these Liverpudlian lightweights, “This ain’t no, Bridget Jones” on repeat and dismal. It was all so fake happy, like organised fun on an 18:30 holiday – it may be easier to go along with but it’s still shit. Now there are worse bands out there but these certainly put me in the worst gig mood of all time, and that is some feat.

Hooray, here come the Holloways! Four big suns behind then lit up and for all to see. Just in case you didn’t know that you MUST be happy at this gig. But The Holloways are so much more enjoyable than the stupid Wombats. They can play and they have some songs to match the hype. The kids were clamouring for ‘Generator’ – their big hit – from the start but were made to wait. Almost every song was met by frenzied approval and new material such as ‘Two Left Feet’ continues in the same vein as the last record ‘So This Is Great Britain’ with added harmonica from Alfie. The lyrics here stand out, “I can’t really dance, but baby won’t you dance with me.” These lads look the part, sound the business and certainly put on a great show. Tonight Cambridge was jumping to an old school beat and although they won’t change the world the Holloways certainly “make you feel better” and damn did we need them after the Wombats.