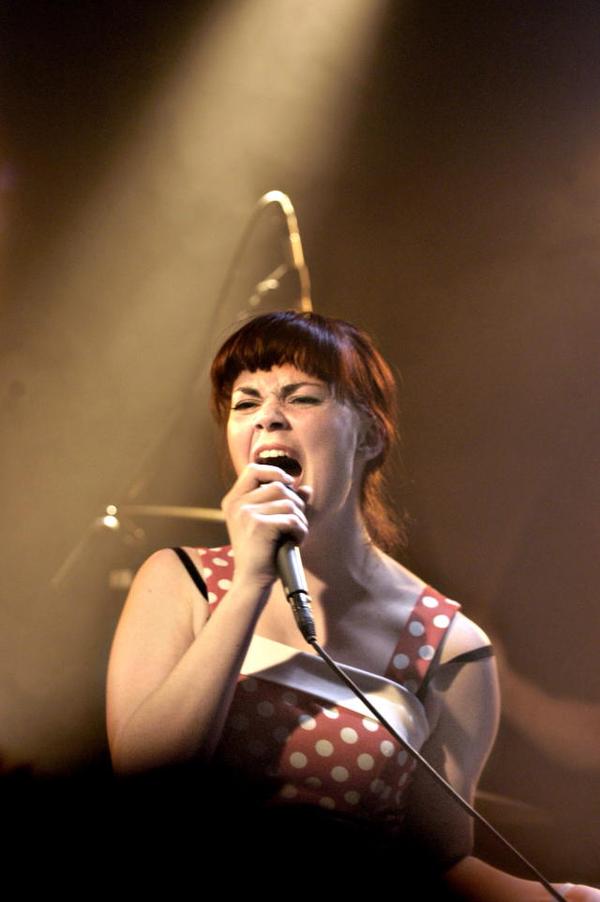 The Sticks are a scrawny guitar-and-drums duo dressed in thermal pyjamas who want to be a performance art garage band. They look like Franz Ferdinand impersonating the White Stripes, but their ‘schtick’ amounts to little more than wearing bags over their heads and donning 3D specs. “We like avant-garde,” one of them declares. Well, their brand of brittle riffs, wordless shouting and abrupt tempo changes might have been avant-garde about thirty years ago, but nowadays it’s decidedly derriere. They’re fun for all of three minutes before they start to outstay their welcome.

I don’t know if you can always judge an act by the calibre of their audience, but the fact that Fyfe Dangerfield and MC Lord Magrao of Guillemots are milling about in the crowd with their respective partners certainly isn’t doing Ida Maria’s reputation any harm. Watching this Norwegian singer perform a pulverising half-hour of raucous pop, you get the impression she’s not likely to be playing venues this small for much longer.

She has a thundering juggernaut of a voice, full-throttled and throaty but delivering breezy melodic hooks and plaintively playful lyrics. “I like you better when you’re naked / I like me better when you’re naked,” she declares on one song, while the irresistible rollick of ‘Queen of the World’ sees her crying out for whiskey and company with delirious abandon – “I bump into things, I spin round in circles.”

It’s an amazing spectacle, as though Bjork had suddenly abandoned her electronic esoterica and decided to do Smiths covers. By the end of the set, Ida Maria has poured a bottle of water over her head, thrown herself into the drumkit, knocked over an amplifier (much to the panic of the venue’s soundman) and whipped the crowd up to a frenzy. More important than the theatrics, though, is the sheer quality of the songs – urgent, sensuous celebrations of life’s transience that stay burrowed in your head long after you’ve gone home. Genius.